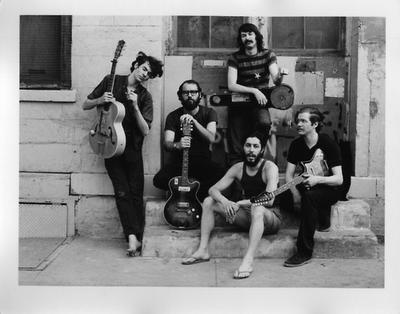 It's been eight months today since my brain surgery, and I couldn't think of a more memorable way to mark it than by the fact that I just spelled Tuli Kupferberg's name up there in the title of this post before I actually looked it up. Tuli and his fellow Fugs—the folk/rock/Beat/poetry/protest/satirical band-review—made their mark on the 1960s for a lot of us with their song "Kill For Peace" that became an early anthem of the anti-war movement.

I encountered it while I was stationed at a SAC (Strategic Air Command) Air Force base and it resonated perhaps more with me and those who worked at this and other SAC bases because their motto, written at the top of a metal arch or band across the entrance to the base (much like the famous Nazi concentration camp motto "Arbeit Macht Frei" loosely translated as "Work Makes You Free" ) was "Peace Is Our Profession"—this from a branch of the service whose mission it was to always have a fleet of bombers with Atom and Hydrogen bombs in them en route to the Soviet Union and China, so that if the USA were attacked by nuclear weapons and wiped out at least we could do the same to China and the Soviet Union!

Tuli got the ridiculous irony in those kinds of Cold War doublespeak and along with poet Ed Sanders and drummer Ken Weaver (later joined by two others from the Holy Modal Rounders—the band Sam Sherperd played drums in early on—Peter Stamfel and Steve Weber) started The Fugs to express the ridiculousness of it all through words and music (and for Tuli, art and writing as well).

The music wasn't always great or even good, but their impact was. I'm sure Country Joe and the Fish's famous anti-Viet-Nam War anthem "Next Stop is Vietnam" as well the "Yippies" and hundreds of other bands and cultural and anarchic anti-war protest groups would not have been as in-your-face rowdy and/or sadly funny etc. without the influence of The Fugs and to a large extent that meant Tuli. 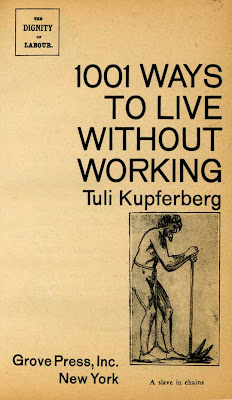 In fact, along with the usual suspects for how the staid and conservative and drab "Silent Generation" of the 1950s morphed into the colorful explosively-expressive anarchic "Flower Children" and "Hippies" (i.e. the influence of Kerouac's ON THE ROAD, the pill, etc.) Tuli Kupferberg should be included. You probably had to be there, but to even just see that slogan KILL FOR PEACE in print (I tore it out of the poetry mag I first saw it in and stuck it to a collage I made c. 1964, around the same time I read his 1001 WAYS TO LIVE WITHOUT WORKING, a big influence on my life!) was like a slap in the face to everything the 1950s stood for, and a revolutionary act of liberation, as in, hey, you're not alone in thinking all this Cold War propaganda is absurd and life deadening, nor in wanting to do something about it.

In many ways, Tuli Kupferberg was the pied piper of the 1960s generation, and I do mean "pied" and "piper"!

congratulations on spelling his name correctly, you are indeed recovering from your recent brain surgery! continuted healing to you.
RIP Mr. Kupferberg.
Shocking news to wake up to today but then again not really as we know he was in failing health. I am SO fortunate to have just received last month one of his drawings after i sent in some money to support his health care costs. Just listened to him and the fugs (electromagnetic steamboat) in the car on the way to work this morning!
he kept me thinking and laughing...i will miss him.
thanks for posting this!
robin

Great post Lals. I love reading your "history" posts about other poets and writers from the 60's and 70's.

And thank you Robin and Jamie. I wonder if there'll be a third American original to pass soon with Tuli and Harvey Pekar