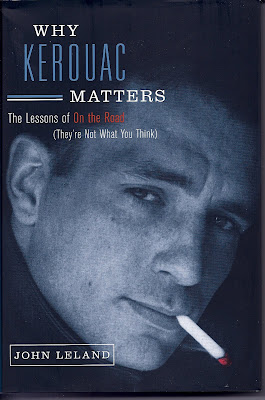 If your a fan of ON THE ROAD or of Jack Kerouac's in general, you'll probably dig this book. Even if you disagree with the author, John Leland, about what Kerouac was doing and trying to do in ON THE ROAD, or about who Kerouac really was, as oposed to the author that critics and academics still can't seem to entirely embrace, or even consider as important as he obviously is.

Few books, let alone novels, have had the impact ON THE ROAD had and continues to have. And though the media image of Kerouac created almost immediately upon publication in 1957—"King of The Beats" bad boy drug using free loving out-for-kicks pied piper of his and following generations—was distorted, and either untrue or only a tiny part of the truth, there have been readers, myself included, who have seen through that and been sympathetic to a committed artist who was deliberately trying to change the way stories are told. And did.

Though I don't concur with a lot of what Leland has to say about Kerouac's accomplishment(s) and what ON THE ROAD specifically means and what Leland thinks Kerouac was tyring to achieve, I still really enjoyed reading WHY KEROUAC MATTERS. Some of Leland's points are entirely well taken and as someone who has read everything I could fine that's out there about Kerouac, a lot of Leland's points either haven't been made before or not as effectively.

One of the best things about WHY KEROUAC MATTERS is that Leland doesn't get bogged down in the academic and critical jargon that has dominated literary criticism for too long. His takes are personal and expressed with energy and a lot of appropriately hip idioms as well as lines and titles that resonate with musical and other cultural references without being "hipper-or-cleverer-than-thou" self-satisfied.

I think he's wrong, for instance when he says you could read the interviews Kerouac gave throughout his life from first to last "without encountering much sign of a noteworthy intellect." He goes on to say "Like Bob Dylan, who has talked twaddle in public for four-plus decades, the real Kerouac is best encountered through the artifice of his fiction."

Even in some of his most drunken interviews Kerouac was capable of gems of wisdom and insight as well as critical acumen. Dylan too. Leland makes other judgments I don't agree with (he seems to think BIG SUR is Kerouac's best book, seemingly because Leland sees it as Kerouac's most honest in delineating his deterioration from the effects of fame and alcoholism). But, he's entiteld to them, and he articulates them engagingly and often originally.

His big original point—though I've read less specific versions of it—is that Rick Warren and the "Jesus movement" that arose from the same generation that produced the flower children, come more out of ON THE ROAD and its influence than the hippies did. And there's a kernel of truth to that. Kerouac was a spiritual seeker and ON THE ROAD does encompass and incorporate a spiritual quest.

But the greatness of Jack Kerouac and his writing, is that he got down his own unique personal vision and struggle and expreince—intellectual as well as sensual and spiritual—not a generation's or movement's or even literary coterie's. There's never been anyone like him before, or since. That's a hell of an achievement, even if you don't dig the results. I happen to.
Posted by Lally at 10:03 PM