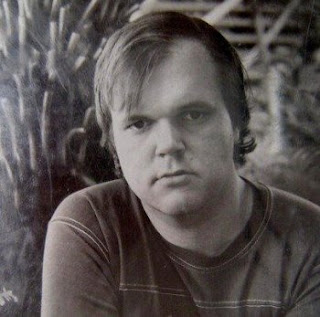 I just learned that poet and friend Scott Wannberg has passed (thanks to Kevin McCollister who emailed me the news along with this link to a great tribute to him—and be sure and read S.A. Griffin's comment/tribute that follows it), way unexpectedly and way too soon.

There are a lot of unique poets and unique characters among the poets I've known in my life, but Scott was more unique than just about any of us.

First of all he was big, not "larger than life" as the cliche goes, but just as large as life truly is. In his presence you felt the fullness of life, of being alive and a human. He was a big man literally, tall and hefty, with a big capacity for friendship and conversation and helpfulness.

As the link will inform you, if you don't already know, he was a fixture in an L.A. area bookstore (Dutton's in Brentwood) for decades. You couldn't miss him when you walked in, if he was there, not only because he was usually taller than anyone else, but also because his presence could be felt like a natural force.

His enthusiasms were contagious, his openness disarming and his thoughtful but insistent truthfulness pretty much inarguable. Though I argued anyway.

I loved the way he always included me in whenever I encountered him, as I tried to do in turn, and how I never once, from the first time I met him, felt anything but deep affection and gratitude for the man, and his work. I've mentioned him before on this blog, for which he expressed his own gratitude and though he was up in Oregon in recent years, I kept in touch as others did through the many poems he would post on facebook and I'd get through email, and he was generous and gentle, as always, in his concern for me after the brain surgery.

He will be sorely missed, and already is. I'll leave you with a poem from a little book he gave me when I was leaving L.A. in 1999 and it had just come out, called EQUAL OPPORTUNITY SLEDGE HAMMER:

I remember him...he was very helpful when I went in there once, looking for books by you, and Ted Berrigan.
Such a shame Dutton's was closed.
They paved paradise....with a furniture store.

i didn't know scott but remember him warmly when the carma bums rolled thru sac a few years back. i bought copies of their books, and marvelled at how such a large man contained such gentleness and cotrolled energy. his death is a shock to the system. the world[s] of poetry is poorer for his absence.

I hear you Suzanne. And yes Richard, Scott was the embodiment of "the gentle giant"—and I don't just mean size, I mean spirit and talent and capacity for generosity as well.