LAST NIGHT I DREAMT I READ SOME POEMS IN VENICE CALIFORNIA 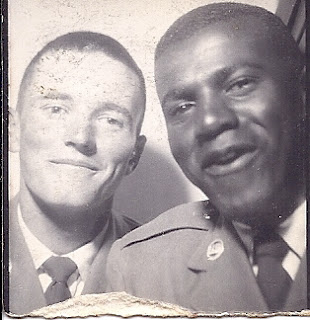 Oh wait, it wasn't a dream!
Sometimes technology can be your friend,
even though last night there were glitches that kept my appearance via Skype at a group poetry reading at
Beyond Baroque in Venice Beach, California.
from starting on schedule or going smoothly at first.
But eventually it worked.

It was kind of a reunion of a big bunch of the regulars who showed up to read for many of the weekly Poetry In Motion readings that went on for over six years in the 1980s and early '90s. The series was started by Eve Brandstein and myself and she organized last night's reading as the first in a monthly revival of the series out there (we also did it monthly in Manhattan, not Beach but New York back then and she may be doing that back East again next year, which I will hopefully be able to be present for).

It was a terrific crowd that I was tuned into a little late but managed to catch most of. Old friends and a few new ones. When it was my time they couldn't get the image up on the screen correctly but eventually did and I got to read two poems and chat a bit with Eve and the others there in this crazy contemporary yet still futuristic way.

The theme of the evening (we always had a theme for people to write on each week, which some saw as corny or manipulative or not independent enough for the poets we invited, usually the same poets who criticized the series for including "Hollywood celebs" in the mix of readers as if being a doctor and a poet or a professor and a poet or a laborer and a poet or an insurance executive and a poet or a banker and a poet (some of our most famous "modern poets" were all of these and more) is okay but being an actor or writer or director or whatever in movies or on TV and a poet is verboten!) was "vets" because it was veteran's day and in a way all or most of the readers were veterans of Poetry In Motion, at least.

I read the poem on the right in my profile, and for each decade mentioned in the poem I had a photo I put on my computer and printed out. The one at the top of this post is me at twenty, with my boot camp buddy "Murph" (we joked a lot about both being Irish since his last name was Murphy). As you can see it's a photo booth shot of us on our first pass (in San Antonio, Texas) and wearing our dress uniforms for the first time. It was also the shortest my hair has ever been (and this is it after it had grown out over the first several weeks of basic!) and probably the best shape I've ever been in. Ah twenty.

[Woops. Just realized I was nineteen. not twenty in this photo. Close enough.]

As for the veterans who actually have seen combat and those who still are, I know it's basically worthless, but I apologize for not being able to do enough to prevent the wars being fought now or to have stopped the other wars in my lifetime sooner than later. May those still fighting return safely and soon. 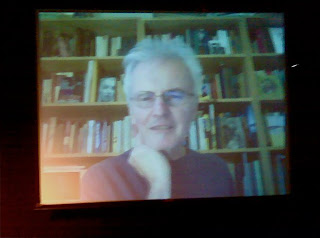 Congratulations Michael and Eve for succeeding in what may bring a whole new dimension to "Poetry in Motion" - and an eco-friendly version no less ...

My only regret is that it didn't stream live for those of us that were unable to attend. I was always fascinated by the level of quality and commitment of the original P.I.M. group brought to their weekly performances - and felt fortunate to be living in LA for the experience. Ya couldn't leave without being drenched by those creative spirits ...

It was also a thrill to speak to you from Venice Beach last week via cell phone - this technology is a joyful tool ...
As a side note, I saw an impersonal Dylan in a small venue concert at Lehigh University last night. I guess for all the road he's traveled, one could become a bit jaded. Here's where technology could bring a little freshness and interactive quality ...
It was good to share air with the guy but the whole thing seemed to be a ironic caricature of days gone by - that's where I believe technology can rejuvenate a generation of significant resources ...

It was last year to-the-date I believe, that you were undergoing some critical surgery ...
Thank God all is well ... and stay tuned ...

I'm with Paul; I wish I could have tuned in to a live stream. Maybe in the future.

Thanks guys. With all the disappointments, financially and otherwise, these days, there's always these unexpected moments of grace and seemingly miraculous discovery and delight. It's always a mix of "good" and "bad" ain't it?