Seeing all the tributes to Elizabeth Taylor's life and movie career got me thinking about why I found her so crucial to my personal history of the movies. The fact is, by the late 1950s I began to find her performances and the movies she was in too melodramatically over the top, the way many were in those years, especially if they were adapted from a Tennessee Williams play. Her whole persona had become kind of campy in a way that left me disappointed.

But in my definition a "classic" is anything that can be returned to again and again and not just be enjoyed and appreciated as much as it originally was, but offers new insights and rewards. Taylor was in several movies I consider personal classics, and she was not just one of the ingredients that went into making them classic, but sometimes the main reason.

They start with her first real movie acting role in LASSIE COME HOME. It came out in 1943 but was one of those movies Hollywood recycled (before televisions became common) for Saturday matinees for the kiddies, of which I was one when I saw it for the first time a few years later and fell in love with Taylor and Lassie!

But the one that was totally dependent, for my taste, on Taylor's screen presence and made her a star was NATIONAL VELVET that came out the following year, 1944. I saw that later as well, and this time it was only her I fell in love with.

Next, for me, came LIFE WITH FATHER, a well done family movie my father took our family to see for one of his few visits to the movies. It came out in 1947 but I'm guessing by the time we saw it it was '48, though I was so little it probably was a later viewing I remember from childhood. Taylor is not the star of this film, but steals it and leaves an indelible impression as she is now playing an adolescent rather than a child, an adolescent perpetually on the verge of womanhood.

There's a little detour in a movie that maybe isn't quite a classic, but I can still watch it and get a kick out of it, A DATE WITH JUDY in 1948, where the star was Jane Powell whom Taylor doesn't quite steal the movie from this time.

Her last classic role as an adolescent is a great comic performance as the self-centered young beauty in the technicolor remake of LITTLE WOMEN in 1949 that I think still holds up today, though the black-and-white Katherine Hepburn earlier version is the accepted classic and rightfully so (the weak link isn't the young women and girl actors—they're all great and include my favorite child actress when I was a child, Margaret O'Brian, as well as the young Angela Lansbury and Janet Leigh, who is the ethereal beauty in this flick—it's Peter Lawford, who could be entertaining but wasn't as good as the females he was performing with, or the other males for that matter).

Then she has two contrasting black and white films in which she is her most luminous, the comedy FATHER OF THE BRIDE in 1950, where she totally holds her own with Spencer Tracy as the foil to his fatherly fears and frustrations, and A PLACE IN THE SUN in 1951 with Montgomery Clift and the scene chewing, but still incredible, Shelly Winters (that won Winters an Oscar).

They were followed by the last two of her films that I actually enjoy watching repeatedly, despite their datedness, the costume drama IVANHOE in 1952, which she elevates with her poignant performance and this time her ethereal beauty that transcends the garishness of the technicolor overkill, and THE LAST TIME I SAW PARIS, 1954, in which her beauty still illuminates the screen like no one before or since, but which also marks the beginning of her being cast in tragic melodramas where she seems directed, or compelled, to do some uncharacteristic (until this film) overacting.

But first, there's a sidestep into an almost uncategorizable genre of its own, GIANT, in 1956. For my taste she's the best thing in this. Surprisingly, her performance seems controlled and understated compared to James Dean's. Though I admire Dean's originality as an actor and screen presence, I find his acting in GIANT overcooked and not nearly as realistic as hers. In fact, Dean's performance has always ruined GIANT for me, but Taylor's has always redeemed it.

Then came the deluge of melodramatic overdoing it, starting with RAINTREE COUNTY in '57, CAT ON A HOT TIN ROOF in '58, SUDDENLY LAST SUMMER, '59, BUTTERFIELD 8 (he first Oscar) in '60, and CLEOPATRA (another film of hers in its own category in many ways) in '63.

There's glimpses of what made her screen presence so powerful in all these films, and also examples of her commitment and enormous talent as a movie actress, but there are also tons of moments that are as campy as it gets. They weren't necessarily her fault always, some of it was bad co-stars (like Lawrence Harvey in BUTTERFIELD 8), or bad writing (at least for the screen in the case of some of the scenes in CAT ON A HOT TIN ROOF and almost all of them in CLEOPATRA). I blame that on the directors and the times. It was fashionable in "the age of anxiety" (the fear of annihilation from atomic war etc.) to make family and relationship melodramas carry the weight of the world, as it were, using the shoulders of "the hunk" (Paul Newman for instance in CAT) or "the beauty queen" (personified, and elevated to camp heights, in CLEOPATRA).

She redeemed herself and won her second Oscar in 1966's adaptation of Edward Albee's WHO'S AFRAID OF VIRGINIA WOOLF? And it was an incredibly brave and committed performance that I can't imagine anyone doing better (and don't want to). But it's not a film I feel like watching again, ever, though I have. It's way too depressing and claustrophobic and cynical for my taste and endurance. But it is considered a classic by others and rightfully so.

There was one last old Hollywood style entertaining movie star turn by Taylor that's still fun to watch for me, and that was in THE TAMING OF THE SHREW the year after her Oscar for WHO'S AFRAID. But after that it's basically over. There are some moments of good acting and even impressive screen presence, but no sustained movie-long movie star achievement.

But given that I've named twelve films I can watch repeatedly, and mostly for Elizabeth Taylor's screen presence and acting, that's a pretty great accomplishment. There aren't too many others I can say that about. A dozen "classic" movie star performances that bear repeated viewing and still entertain and sometimes even enlighten (A PLACE IN THE SUN always reveals more than I thought I knew about it, including about her amazingly controlled and nuanced performance, for my taste it's her greatest film).

And that's not to mention all the great qualities those who have been eulogizing her over the past twenty-four hours have pointed out, including and especially her loyalty to friends and courage in championing causes others were still afraid to have any connection with, mainly the fight against AIDS when it was first being fought.

They say she hated being called "Liz" so, once again, R.I.P. Elizabeth. 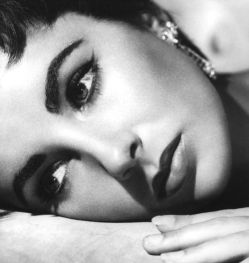 Dear M:
I think this is one of your best posts---full of such abundant insight and knowledge. Nice going.
---Richard Burton

Vale Elizabeth Taylor, a wonderful actress for all her eccentricities and foibles. It feels like the end of an era.

Thanks Richard, and Elisabeth, I think it just might be.

Off the top of my head and maybe even in reverse order...Yes, I can acknowledge its a great movie in all respects but its nearly impossible for me to want to see "Who's Afraid of Virgina Wolf."

As for "Suddenly Last Summer," its sort of amazing that movie got made. There certainly is no market for something like that these days.

Giant - I guess James Dean acting doesn't bug me nearly as much as Rock Hudson's. And to age Taylor and Hudson they seemed to have sprinkled lots and lots of flour on their heads. And that was all.

A Place In The Sun - just a really fine, fine movie.

PS - right now TCM is showing "Ninotchka." I just don't get Lubitsch. At all.

K, I hear you about SUDDENLY LAST SUMMER. And Lubitsch is probably overrated, especially in light of so many that are underrated. But, though slight in their his way, THE SHOP AROUND THE CORNER, TO BE OR NOT TO BE and HEAVEN CAN WAIT are worth watching for sure. At least for me.

Woops. That was an interesting brain spasm "in their his way"—which I can see is exactly what I meant, though I could have punctuated it differently to have it make more sense.