I just heard that Lanford Wilson passed last night [Here's the NY Times obit, what follows is not an obituary but my personal response to his passing]. He was a playwright known for the three plays in his Talley trilogy—including the Pulitzer-Prize-winning "Talley's Folly" and the critically acclaimed third one "The Fifth of July"—and even more for "Hot l Baltimore" and "Burn This."

But I first met him around 1982 at a performance of Richard III that starred William Hurt and Lindsay Crouse and got a lot of attention because the male actors, for a change, were semi-naked (basically they wore loincloths which for some reason a lot of women, and men for that matter, wanted to see the young up and coming William Hurt in—I wasn't one of them since I had already seen Hurt in a play about Lord Byron and thought he was a pretty self-conscious and mannered actor, and in this Richard III he was even worse [he got better in movies, many of which I liked], mumbling his lines to himself and spending a lot of time in the fetal position either so that the audience could get a better look at the naked part of his buttocks or because he was embarrassed or on drugs or anything else you could surmise, but Wilson and I agreed that the actual best performance in the play was Richard Cox's, an actor a lot of people thought was heading for movie stardom though unfortunately for audiences that didn't happen.)

Wilson and I hit it off immediately. He was—at least in my few encounters with him—an incredibly approachable, accessible, even self-effacing to some extent, and very nice man.

But the play of his I have a personal connection with and loved the most is "Balm in Gilead." I moved to L.A. shortly after I first met Wilson at that Shakespeare play and within months was cast in the L.A. premiere of "Gilead" (over fifteen years after the New York premiere at La Mama!).

It was a wonderful play to be a part of, with a huge cast all of whom became good friends and all of whom had interesting and varied careers and later lives. But mostly it was wonderful because of Wilson's terrific dialogue for the late night misfits that occupied the cafe the play was set in, and which I played "John, the counterman" in and so was on stage for most of the play and had interchanges with a lot of the other characters.

I haven't acted in too many plays. It was never my dream or ambition to be a theater actor. I was always drawn to movies and found the experience of watching plays live almost unbearable sometimes. I either identify so strongly with the characters I squirm in embarrassment for them or want to shout out encouragement or sympathy, or I feel like I have to jump out of my seat with the worry for them. Kind of childish, or child-like if interpreted in a better light, but my plight.

I also feel embarrassed for performers who do things like Hurt did in that production of Richard III, at least the night I saw it, and that makes me uncomfortable in my seat as well. Though I have had some amazingly satisfying and enlightening and entertaining experiences watching live plays over the years as well.

But movies were always my main love when it came to being a member of an audience and appreciating the art of acting. I know the theater is more rigorous a test for pure acting without the benefit of retakes and editing, and I have seen some great stage acting. But the obvious artifice of live theater often gets in the way for me. (But I do love to read plays and have a big lists of plays that I consider lifelong favorites and playwrights who I admire greatly, including Wilson, though not all his plays work as well for me as others.)

Anyway, long explanations for my saying that except for plays and theater performances that were based on my own writing, or of which my writing was a part, the only play I ever acted in professionally was Lanford Wilson's "Balm In Gilead" and it was a life changing experience in more ways than I care to tell outside my memoirs.

So Lanford Wilson will not only be missed by me because of his unique talent as a playwright, and as someone I spoke with a few times and enjoyed the company of, but as someone who created a work of art that personally changed my life when I became a part of it.

And as my old friend the late Hubert "Cubby" Selby said in an interview I did with him a few years after my experience in "Balm In Gilead," "A work of art must change your life, otherwise it's not a success for you." 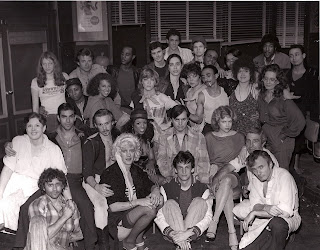 [The cast of the L.A. staging of "Balm in Gilead"—that's me in the white shirt and apron on one knee in the front row—click to enlarge, as always.]
[PS: On my computer when you click on the photo to enlarge it, it gives you an option to enlarge it even more so that you have to scan it from left to right and bottom to top to see everyone, and if you do, you'll see some faces you saw and still see on TV and in movies in the decades after this shot was taken.]
Posted by Lally at 1:18 PM

It'll be a challenge with my post-brain-surgery aversion to lists, but I'll make the effort, and thanks for asking Tom.