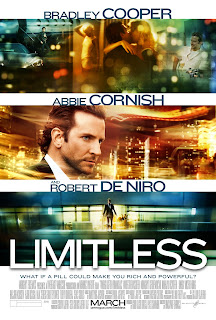 It's a fun ride, an entertaining escape, and though it's gotten some lukewarm reviews because of plot problems, it's still puts the usual special effects to much better use than a lot of other recent movies.

Bradley Cooper pretty much is the movie. There's other good performances, including one by DiNiro and another by Abbie Cornish (who I found less appealing in LIMITLESS than I did in BRIGHT STAR which she was the bright star of). But Bradley Cooper proves he can carry a movie, and does.

I suggest you see it on the big screen just to get the full effect of the special effects, some of which I hadn't seen before and except for some overkill about midway through are used well and mostly in support of the story, unlike too many recent movies that use similar effects seemingly more to show them off than to serve any plot you can follow in a way that's worth the effort (like INTRUSION).

Some plot points in LIMITLESS raise questions that either aren't answered or are answered so ambiguously they just raise more questions. Some critics have found this a sign of director Neil Burger's and/or screenwriter Leslie Dixon's not doing their job well.  But in retrospect I think a case could be made that it was their intention, for as much as this is an action caper slash thriller slash mildly sci fi movie meant to entertain more than enlighten, there's a few threads of subtext in it that may not be as intellectually satisfying as a movie about a character becoming super smart should be, but they still engaged me.

I left the theater smiling and feeling pretty satisfied.
Posted by Lally at 12:32 AM