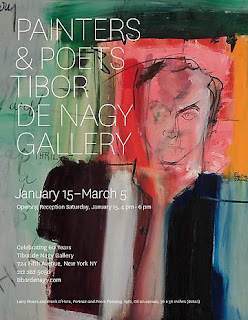 I haven't been getting into the city much since the brain operation. I'm still sometimes a little overwhelmed by too much stimulus (stimuli?) and get a little anxious in some crowded situations.

But I have done it and have been meaning to go see this show—PAINTERS & POETS— at the Tibor de Nagy Gallery on Fifth Avenue near 57Th Street. I just realized it closes this Saturday, march 5th, so if I'm going I've got to get going soon.

The show is in celebration of the sixtieth anniversary of the gallery, begun back in 1951, obviously, and from the start a place where New York painters and poets were celebrated. The gallery published what people call "chapbooks" (i.e. less pages than a normal book, usually saddle-stitched—meaning the pages just fold in the middle so the "book" has no spine—and soft paper covers, etc.) of many of what became known as (and one of the gallery owners supposedly coined) "The New York School Poets"—Frank O'Hara, Barbara Guest, et. al.

I missed some of the many events the gallery has had in honor of the anniversary since the show opened in January, including a reading with John Ashbery, Bill Berkson and Ron Padgett. Wish I had made it to that one. But between my post-brain-op reluctance to go to events in the city as much and my caring for my thirteen-year-old, I wasn't able to make them.

But the gallery was kind enough to send me the catalogue for the show, and it has become one of my favorite books. The page size is art book big, with a hardcover (no dust jacket) detail from a Larry Rivers painting of O'Hara (as seen above) and inside are many reproductions of paintings and poems and photographs of the artists and poets and supporters of the gallery and its press.

There are also two essays, the first and longest by poet Douglas Crase (who I don't see much but consider an old friend anyway) is one of the main reasons I love this book and recommend you get it if you have any interest in any of "The New York School Poets" or the painters the gallery showed, like Fairfield Porter, Jane Freilicher, Joan Mitchell, et. al.

Here's an excerpted paragraph from Crase's very witty, very insightful and very informative (and sometimes contrary in brilliantly original ways) essay "A Hidden History of the Avant-Garde" from the catalogue:

"Friends of the gallery are familiar with the explicit collaborations of its artists. Of equal if perhaps more lasting interest were the implicit collaborations that produced work that remains valuable without reference to its extraneous sociability. The aesthetic affinity that arose between Porter and Schuyler [poet James Schuyler], for example, made theirs the greatest instance of a painter-poet friendship in the history of American art. Their near competition for the title, as it turns out, has been the steadier, more elusive rapport that links the works of another painter-poet pair associated with the gallery: Frielicher and Ashbery. It's true that the shared concerns of this latter pair are not so apparent. We are always entitled, however, to look for clues; and a logical place to begin is with Ashbery's mirror-like essay "Jane Frielicher." In the casually delivered credo of that essay he praised her work as "tentative," and went on to state his belief that most good things are tentative "or should be if they aren't." The observable paradox may be that the works of both are steadily tentative. But the paradox only reveals that Ashbery's idea of the "tentative" must be another way to identify that combination of disinterest and concentration which delivers us in Freilicher's paintings, as it does in his poems, from the erosive claims of faction and time."

[PS: in the phrase "steadily tentative" above the "steadily" is italicized but I've yet to figure out how to italicize on this blog, and yes I have the device that's supposed to achieve that but it never seems to work!]

[PPS: Thanks to Tom Raworth for emailing me how to do the italics: it worked!]

[PPPS: I'm remiss for not mentioning the other essay in this book, equally engaging, by Jenni Quilter, called "The Love of Looking: Collaborations between Artists and Writers."]
Posted by Lally at 12:02 PM