He was the great late Indian activist as well as the late great Hollywood actor. There may have been a modern day Native American rights movement without him, but it would not likely have garnered as much attention from the rest of the world or inspired as many Indian peoples as well as their supporters to become activists for Native American rights.

For several decades now, Russell Means has been the face of Native American activism and the fight for native rights, as well as most movie audiences' idea of what old time Native Americans were really like.

As an activist, his stand at Wounded Knee in the early 1970s was as dramatic and emphatic as any Southern Civil Rights milestone or anti-Viet Nam War demonstration. And as an actor his title role in THE LAST OF THE MOHICANS made that movie work (and remain one of my alltime favorites, especially on the big screen). 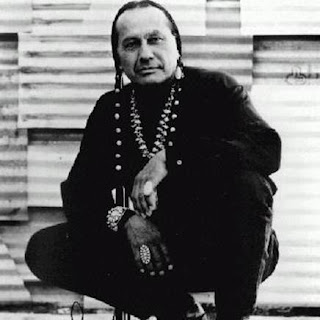 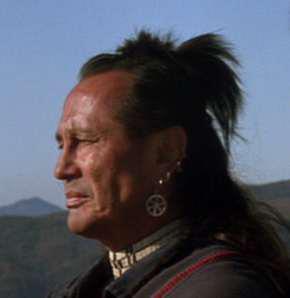 He was as complex and contradictory as any risk taking radical or artist, but there was no denying his impact. The trademark braids of his days as an activist made his image as indelible as the similar one on the so-called "Indian head nickel" of my childhood. And his more weathered lived-in earring look in LAST OF THE MOHICANS was as iconic as any Native American image from the past, distant or recent.

Russell Means, a true American original with all the power and depth of the traditional.

[PS: I almost always put the word "American" in quotes when I use it, since it seems presumptuous and even pretentious of those of us who live in the USA to assume that title when there are so many other parts of the Americas, and when the true native Americans were here way before us or our ancestors. But Russell Means was a true American, with no quotation marks necessary.]
Posted by Lally at 12:13 AM

He raised some hell.