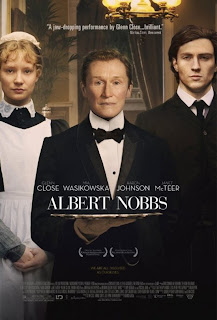 The other night, up in The Berkshires, I got to watch on a really big wall-mounted flat-screen TV a movie that's being touted for various awards, especially for Best Actress for Glenn Close—ALBERT NOBBS.

Based on a novel set in Dublin at the very start of the 20th Century, it's about gender bending out of economic and personal necessity. It's an intellectually stimulating premise and raises a lot of deep questions about not just historic perceptions and presumptions about gender and gender roles, but also about personal fulfillment in general.

There are certainly some Oscar performances in ALBERT NOBBS, but I'm not so sure one of them is Glen Close's. She does her usual great job, but it's so restrained by her interpretation of the character that it's almost missing at times. And it's definitely her interpretation, because without her the movie would never have been made, plus she co-wrote the screenplay and is one of the producers.

The back story of the movie is that Close has been trying to get it made since the mid-1980s when it was first done as a play. My take is it would have been totally appropriate for her to play the lead in the 1980s, but I'd like to have seen someone younger do it this time, and someone more appropriate for the suspension of belief, though Close certainly does her best, and her best is better than most.

But not as good as one of her co-stars, Janet McTeer, who is on my short list for award season nominations for Best Actress, even though others might see her role as only warranting Best Supporting Actress.

There's a bunch of great acting in this film, but not consistently across the cast. McTeer and the wonderful Mia Wasikowska are at the top of the list. But in smaller roles Brendan Gleeson and Pauline Collins are equally terrific. As, in even smaller roles, are Brenda Fricker and two women I originally discovered in THE COMMITMENTS and are a delight in ALBERT NOBBS—Broangh Gallagher and Maria Doyle Kennedy (just Maria Doyle in THE COMMITMENTS).

But there's also some weak acting, like from the male lead Aaron Johnson, which I blame on the director, Rodrigo Garcia. I watched the film with people connected to movie making and early on one of them pointed out how bad the lighting was in a scene (with no source of the light, making the scene look overlit and way too bright for any emotional impact but also for the time and place) and blamed the director, correctly.

Nonetheless, despite its inconsistent quality, the subject matter is so compelling and some of the performances so brilliant (McTeer's the most), I recommend seeing it.
Posted by Lally at 10:31 PM

For an excellent earlier example of gender-bending, see the story "The Man Of All Work" in Richard Wright's story collection, EIGHT MEN.
Bob B.