The rightwing (mostly Republican) upholders and supporters and minions and justifiers (etc.) of corporate power continue to rule a lot of our individual and collective lives.

Progressive and liberal (mostly Democratic) politicians and activists and supporters sometimes, not often enough for my taste, challenge corporate control of so much in and of our lives.

In order to disengage, defuse, weaken or just overwhelm any and all opposition to corporate power, an overt and a stealth campaign continues to turn potential activists into cynics who "opt out" which, in this almost totally wired society means passively submit to corporate control whether obvious or not.

The reason I'm bringing this up is my recent following of a few cable TV shows recommended by friends. The first is in its second season: HBO's BOARDWALK EMPIRE. This could have been a very sophisticated show (it's produced by Martin Scorcese, among other film luminaries, and he directed the pilot) based on real life characters in prohibition era Atlantic City.

There are so many possible story lines and important themes in the real history (women's rights, racism and civil rights, veterans issues including post-WWI traumas, political and criminal intrigue etc.) that several seasons could have been done based on reality alone. And it could have been a terrific history lesson and even helped understand the political issues of our time.

But nooooo. They had to take the knee jerk easiest way to "get eyeballs" as they say, i.e. a large audience, by creating fictional characters and story lines that give the impression that everyone in 1920s Atlantic City and beyond were selfish, self-centered, cynical and extremely violent opportunists who would stoop to almost anything, and in some cases beyond that, for their short term benefit. 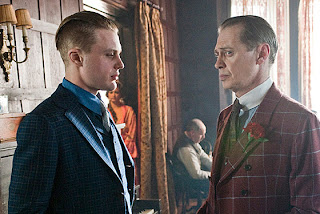 [The characters above are fictional (on the left) and based on a real person (right) but equally unrealistically (and un-historically) violent (directly or indirectly).]

The violence depicted in BOARDWALK EMPIRE is so gratuitous and egregious it makes THE SOPRANOS look innocent. It breaks my heart that so much good acting and camera work and art direction and other film making skills are wasted on over-the-top portrayals of a kind of evil that certainly exists and may have back then and there, but nowhere near the extent depicted.

Then there's BOSS on I think the STARZ cable network. It too has a big star in the lead role (it's always interesting to watch Steve Buscemi in BOARDWALK EMPIRE) Kelsey Grammer, mostly known as a comic actor, and one I wasn't as crazy about as everyone else seemed to be, cast here as a big city (Chicago) political mayor/boss in the present, a present that again seems to have not one redeeming character. 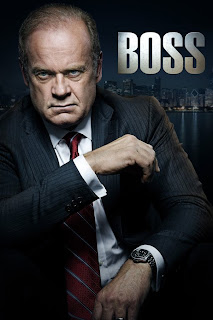 Everyone in BOSS reveals a self-serving petty and even evil core that casts contemporary "American" life as full of selfish pariahs or victims whose victimhood has turned them into selfish pariahs. It's depressing as hell. Literally. The counterintuitive casting of Kelsey Grammer works on some levels, and his performance, especially dealing with a brain disease causing his thinking to freeze or glitch or misfire in ways I recognize, is often captivatingly effective.

But in the service of what? Overwhelming an audience with the idea, just as in BOARDWALK EMPIRE, that all politics is conducted on the level of Satan and the hellhounds? Give me a break, please.

Then there's a new show I couldn't get past the opening of, HELL ON WHEELS on AMC (I think). Just the premise pissed me off. It's purportedly a serious historic drama with the race to complete the transcontinental railroad as the backdrop. But the main character, the "hero" if you will, is an ex-Confederate soldier whose wife was murdered by those damn Yankee soldiers.

I'm so sick of the myth of Southern "honor" and rectitude in defense of Northern aggression and dishonorable violence this kind of set up makes me want to scream. Was it Dickens or some other 19th century luminary that encountered on a trip to the Southern U.S. the deliberate and public burning of a slave that made him say it would be better if the USA failed and the wilderness and natives took the country over again? 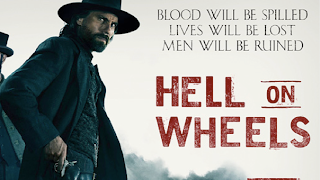 The South's cause was NOT honorable, nor somehow based on gentlemanly rules and carried out with consideration and charm. The "Southern way of life" was based on the brutal and deadly violence meted out to slaves considered on a par with animals, and the war was waged just as brutally and dishonorably.

Yes there were atrocities on both sides, but the forerunner of Auschwitz was not any prisoner-of-war camp in the North where Confederate soldiers were kept, it was the ones in the South where Union soldiers were tortured and starved to death, among other brutalities. There was honor enough as well, and kindness and courtesy and an attempt to be as civilized as the times and circumstances permitted on both sides.

But where are the classic Hollywood movies about the kindness and courtesy of Union troops in the South or the Yankees defending not only their honor and the honor of their women and children but of fellow humans being treated like animals and worse. Unfortunately most of the classic Westerns and Civil War movies of Hollywood's classic era were influenced by the Reconstruction and post-Reconstruction Era's attempts by the North not to rub in the South's defeat and to leave them with their myth of an "honorable" cause carried out with gentlemanly courtesy and charm.

Not that the little I saw of HEEL ON WHEELS had much of the latter. It seemed more like what used to be straight-to-video bloodfest films that were so ridiculously over-the-top they were more camp than serious. But these days, that kind of depiction of gratuitous violence and evil seems to be taken very seriously, ala all these shows and the only one worth watching, in my opinion, HOMELAND (though I will probably stay hooked to BOARDWALK EMPIRE and BOSS for the acting).

What makes HOMELAND at least a little better is, first of all, its star Claire Danes. After her almost unbelievably unique and amazing performance as the lead in the story of Temple Grandin (am I getting that last name right?) she has become in my mind our greatest living actress. And in HOMELAND she proves it for my taste. 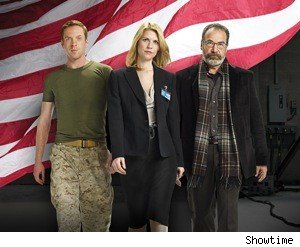 She not only plays an intelligence agent but one with a secret mental illness in a story line about a returning veteran who was held as a prisoner of war by terrorists for eight years. She suspects during that time he was "turned" and is now a sleeper agent for terrorism. The show provides enough clues to support that, but also enough to support the counter argument that he is just suffering from the trauma of being beaten and tortured and generally abused by his captors.

Unfortunately, this show also has too much gratuitous violence (okay, showing blood in a movie was a revolutionary act back in the 1960s but after decades of buckets of blood it's no longer a radical gesture, just an obvious one and a cheap one at that). And like the others, though in a much more compelling and sophisticated way, could easily be used as a justification for the kind of cynicism that leads to futility and giving up any belief that there's any point to fighting the powers-that-be, which ultimately, are corporations, the same ones backing these shows.

[Full discosure: I met and read poetry with (in my case my own, in hers Alice Notley's) Claire Danes a few years ago, see photo below.] 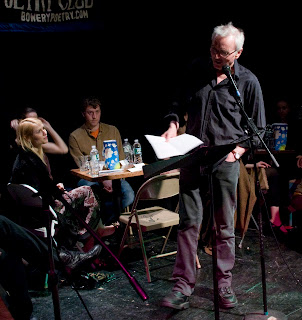 Maybe they've got eyeballs, Mike -- but not hearts.

Thanks for the conscience, again.

I've watched "Boardwalk Empire" and "Boss" from the beginning. I pretty much agree with your assessment of those shows, but my eyeballs just can't stop watching!

I had decided to skip "Hell on Wheels" and your review has validated that decision.

Now, on to "Homeland." This is my favorite new TV show by far. Claire Danes is simply amazing in this show. That scene in the last episode where she goes off on Mandy Patinkin's character was so fantastic I had to watch it three times just to see how she uses her face and particularly her eyes. Wow! But let's not forget Damian Lewis, who was terrific in "Band of Brothers" and in his own show "Life," which did not get the recognition it deserved. And Mandy Patinkin excels, as always. Plus, the writing is sharp and credible. In this case, I think the violence is not gratuitous, but in fact essential because you need to see the torture that Damian Lewis's character was subjected to, including seeing his own friend beaten to death.

I hear you Alameda Tom (as opposed to the first commenter). You make goods points about the other actors on HOMELAND. And I can see your point about the torture violence too, though I think it could be done in a way that would be more indirect or obvious and still work (think of films where watching an observer's face or even the victim's says more than all the blood used these days to convey brutal violence.