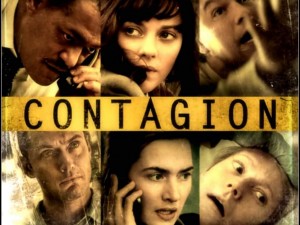 It's award season again. So far I'm receiving fewer CDs in the mail from movie producers looking for votes for the SAG and WGA awards etc. The few I've received, I've already seen, except for CONTAGION.

I avoided seeing this because I thought it would be too heavy and, frankly, scary. I never dug horror movies, even as a kid (ironic that the first two movies I had star billing in were both horror flicks). Or any kind of deliberately scary movie. Movies where scares are part of the larger story but not the point I can take, but scary for the sake of scaring the audience just always seemed like a wasted effort to me, a cheap shot.

Anyway, I was wrong about CONTAGION. Although the point may be to scare an audience for either some higher purpose—to have better global preventative protocols to stop the spread of new viruses and diseases etc.—or even just to appeal to audiences that dig being scared (that leaves me out), CONTAGION doesn't work on that level.

Yes there are a few moments of gore where I had to turn away, and intellectually the story is scary. But the movie makers fail to create an emotional connection and therefore stake in the story—mostly in the writing and editing, the acting by contrast is pretty uniformly exemplary.

This often happens with movies—and other art forms—that attempt to make big statements. The emotional resonance gets lost in trying to do too much. It's a challenge with a theme like that of CONTAGION because the story is compelled to cover the globe to make its point that because of globalization we are much more susceptible to bigger and faster spreading epidemics caused by new exposures of humans to all kinds of diseases and viruses etc.

But we already knew that. The story should have concentrated on a few human stories that hooked us emotionally and made us care about the individuals. Instead CONTAGION almost does the opposite, with a few exceptions. there's some really interesting subplots that get lost or dropped or overwhelmed by the main story lines (of which there are too many also).

The producers are suggesting Laurence Fishburne for "Best Actor" awards and Matt Damon and Jude Law for "Best Supporting Actor" awards. But if anyone is the lead in this flick it's Matt Damon, who is always a revelation and is once again here. When he first comes onscreen I didn't recognize him for a minute, thinking the director had found an obscure actor who looked like an American everyman, but then I saw it was Damon. His performance makes the movie worth watching to me.

As does Jude Law's, who plays the foil to Fishburne's character. Fishburne's performance is beautifully understated, but at times I wished for less of that and more emotional relating to the other characters and the audience. But law's performance displays so much variety it's difficult to decided how to react, faking the audience out until almost the end.

Interestingly, the movie makers did not suggest anyone for "Best Actress" just a long list for "Best Supporting Actress"—including Marion Cotillard, always great to watch, Jennifer Ehle, Sanaa Lathan, Gwyneth Paltrow and Kate Winslet, who should be the one up for "Best Actress" (or female actor as I prefer to label that category).

Winslet, like Damon, is always a revelation and always terrific, and is so here. I'd have liked to see the filmmakers use her and Damon more, especially together. They dropped that possibility way too fast.

I have to blame Steven Soderbergh for this failure of this movie to hook me emotionally, but it's mainly because he let the screenwriter, Scott Z. Burns, get away with trying to do too much without enough time or emotional justification to do it.

Yet, the movie's worth watching as an intellectually engaging premise. My friend Sue, who watched it with me, pointed out that the interconnectedness of all of us caused by globalization is not just a danger regarding disease but that the same set of circumstances that snowballed the contagion in CONTAGION could and may well happen (or may already be) in terms of the globalization of the world economy.

But like everything, this can be "good" or "bad" or most likely both, depending on how it plays out or what seat in the universe you're looking at it from—as say the "bad" results of the way Wall Street's shenanigans led to an nearly worldwide economic collapse, and the Arab Spring awakening led to a widespread, almost worldwide, resurgence of popular movements to demand change in governmental collusion with the interests of the wealthy, etc.

So CONTAGION for my taste is worth watching for some of the acting and for the ideas inherent in the story, but don't expect to end up with any emotional or spiritual or even psychological satisfaction. Just maybe some intellectual gratification.
Posted by Lally at 12:25 AM