THE IDES OF MARCH 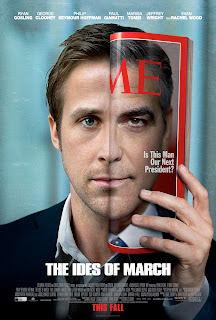 Went to see THE IDEAS OF MARCH with my friend Bill Lannigan the other night. We had the choice of several movies we both wanted to see but I kept pushing for this one, because George Clooney has yet to disappoint me, as an actor, a director, a movie maker (and a political activist for that matter).

There are only a handful of people whose creativity always works for me, Clooney's one of them. And it was a good call (I think Bill would agree). The cynicism at the heart of the movie I might not agree with entirely, but it's a timely story about political campaigns and the compromises made for success at almost any level of participation.

It's set in a Democratic Governor's campaign to win his party's nomination, so the ideals everyone signs up for are ones I share, but the tactics they end up thinking they have to use to win are ones I've often rejected—in politics and my work and "careers"—which might help explain choices and decisions that kept me from the kind of success I, and others, sometimes envisioned for me. And I suspect that's true for a lot of you reading this.

So even though I believe in the real world there's less use of the kind of cutthroat tactics used by almost everyone in this film, nonetheless, it makes for powerful storytelling. And like I said, anything I've seen Clooney associated with is usually good movie making, including storywise. THE IDES OF MARCH, which he co-wrote, is no exception.

So here's a well told tale, directed economically and wisely by Clooney (who also co-stars as the candidate) and cast brilliantly. The story is worth seeing the movie for, but the acting is too, so it's a double winner.

Ryan Gosling plays the conflicted lead and does his usual expert job of carrying the story on his character's shoulders, though I would have liked an even bigger emotional transition. But he pulls off his more subtle version because he's so good at playing the moment realistically. Then there's Philip Seymour Hoffman at his disheveled best, bringing the reality all the way home, and Paul Giammati matching him move for move.

Even Rachel Wood plays the ingenue role as brilliantly as she always does, a variation done so truthfully I was hooked before the end of her first scene. And Maria Tomei—an unfortunately underutilized actress in my opinion—is as great as she always is, anchoring a subplot with her natural gift for character. Jeffrey Wright, another favorite actor, has a part as well and plays it as it should be played.

THE IDES OF MARCH is about ideas and the behavior they support or are used as an excuse for. You don't get too many of those these days, so again, it's worth seeing for that too. Bottom line, as they say, it's worth seeing.
Posted by Lally at 12:09 AM

I agree about George Clooney---for me, O, Brother, Where Art Thou? & Michael Clayton are the best 2 films of the past 15 or so years. I never read your movie reviews, my dear friend, because I like to keep my tabula nice and rasa, but I'd actually seen this one a few weeks ago. And it is an excellent film with a great cast. Parts of the narrative were a little unconvincing (the suicide most of all), but I won't quibble---it's definitely worth seeing.

Yeah, I try not to give away any of the plot in my assessments of whether I find a flick worth seeing or no, so usually you can read them without worrying about that. Though I know if I hear to much praise for a movie I can be disappointed, and vice versa.

T'anks for the compliment Bill.