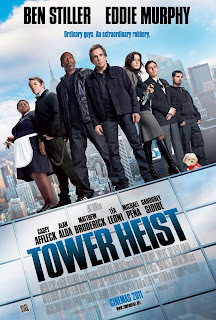 So the movie I saw with my daughter and older son yesterday was TOWER HEIST. I was pretty sure—given the cast and others involved—it could be an easy movie to agree on, an action comedy heist picture, sure Hollywood escapism.

The best heist flick I've seen since THE TOWN, with parts of it equally improbable, but instead of serious, TOWER HEIST is very funny, though not quite as escapist as it might seem, because the plot involves getting revenge against a Wall Street investor who seems to be getting away with...well, the usual Wall Street crime.

The cast is worth the price of admission, for me, and to have laugh-'til-you're-squeaking moments cascade into missing-half-the-lines-in-a-scene is pretty satisfying too when you're looking to be entertained. The timeliness of the plot, almost an Occupy Wall Street storyline on some levels, is an accident, since the story idea's been around for a while and the project took years to make happen.

The secret to getting it made, I heard, was getting Eddie Murphy to co-star in it with Ben Stiller, the lead. Stiller is still one of the movies best comic actors, and he proves it in TOWER HEIST. And Murphy, as much as he can sometimes aggravate me, is the most successful (tickets sold, money made) movie comedian of all time, yep, for a reason too. When the man's funny, he's hysterical. This is the best thing he's done in a while for my taste too.

Then there's the supporting cast. Like a sports dream team. Matthew Broderick's deadpan rim shots had me bending over from laughing so hard, and when he breaks that pattern (unusual for him) and becomes manic for a minute, it's even funnier. And Casey Affleck is one of my favorite movie actors out there right now. There doesn't seem to be anything he can't do or convince me he can.

His role in TOWER HEIST calls for a little deadpan, a little dim, a little foil for Stiller and he nails it. As does Tea Leoni, an actress I fall in love with almost every time I see her on screen. She has one of the best drunk scenes in films in TOWER HEIST and it only lasts a few minutes.

The entire cast is pretty terrific, including Alan Alda as the Wall Street big shot and Judd Hirsch as "management" but—one of the smartest and best casting choices the filmmakers made in TOWER HEIST was hiring Gabourney Sidibe. I remember when she was nominated for her starring debut role in PUSH some critics and commentators were saying it was sad that she was given all that attention because a young woman who looked like her (very heavy and very dark) would probably never be hired for a role again. Their thinking being how many roles can there be for anything other than traditional good-looking whatevers.

Duh! It made me totally angry because she obviously is an amazing actress. Fortunately, she went on to prove it in everything I've seen her in since, like her role in THE BIG C on cable and now her role as a Jamaican maid in TOWER HEIST.

She gives everyone a run for the money in this flick and pulls it off so adroitly, if they gave Oscars for comic roles, she'd deserve a nomination.

Don't get me wrong, this is pretty much Hollywood fluff, but some of the best comic fluff in a while. Brett Ratner, the director, might be a jerk in some ways (as I've heard from Hollywood friends and he seemed to prove by making what could be interpreted as anti-gay remarks on Howard Stern's show (surprise surprise) (whether they were or not the producers of the Oscars immediately fired him from directing that show this season and with him went Eddie Murphy as the host) but (if you remember the beginning of the sentence still) he (Ratner, the director) proves with TOWER HEIST that there's more to funny movies than Judd Apatow and his many admirers and imitators.

Check it out, just for laughs (and for what I assume will be Heavy D's last appearance in a flick in a cameo as a courthouse guard, may he rest in peace).
Posted by Lally at 8:25 PM