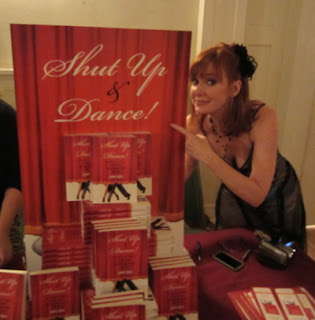 If you're anywhere near Maplewood, New Jersey, tomorrow evening at 7:30 I highly recommend you stop by the local bookstore, WORDS, to see my very funny, yet still glamorous, multi-talented regular commenter on this blog and dear old pal, Jamie Rose read from and sign her part self-help part-autobiographical first book (full disclosure: I helped edit it and am quoted in it) SHUT UP & DANCE!
It's the story of how she found lasting romance (not to mention marriage) by overcoming her need to "run the show" all the time (in relationships) because that's how she achieved her independence and success as a film and TV actress in the competitive world of Hollywood.
She grew up acting, starting when she was barely past toddlerhood, becoming a household fixture for many as a young woman on the '80s TV hit FALCON CREST and later playing the first uniformed, solo, female cop on TV in a show built around her character: LADY BLUE.
In more recent years you've seen her as a guest star on everything from E.R. to TWO AND A HALF MEN, and in such cult classic films as BIKER CHICKS IN ZOMBIETOWN!
She's always been a terrific writer and I'm happy that's come together in her first book which not only tells the story of how she found lifelong romance after a lifetime of start-and-stop mini-love-stories that didn't work out because of...well, read the book, which, by the way is worth it if only for the photos, but also contains some great exercises for discovering "the goddess" in yourself (aimed obviously at the ladies) as well as how to have a more fluid, balanced and lasting relationship with your mate of any gender.
Come by if you can: I'll be there for sure, tomorrow, Saturday, November 5th, 7:30PM, WORDS, 179 Maplewood Avenue, Maplewood, NJ.

[And if you can't make it, buy the book!—the freelance actor/writer gig ain't easy to make work in any economy, but these days...] 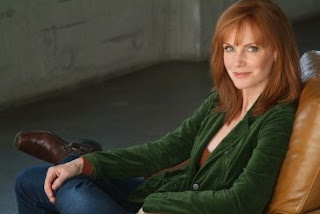 Wish I could make it! Congrats on the book Jamie!

Jamie, Bravo! Your's has been a positve, caring voice on this blog and your book is a delightful surprise but really, not a suprise at all.

I just read this. Thank so much Lals. And it was so great hanging with you tonight.

And love to you Miles and Robert!