Me at the piano on the small stage at The Cornelia Street Cafe just before the reading started that I took part in Oct. 20th. I'm not sure who took the photo, maybe the reading organizer my old pal Eve Brandstein. The reason I don't know is because I was so intent on playing quietly, I thought no one was noticing and was completely unaware that someone was standing on the stage taking a photograph! That's the kind of focus it seems only (almost) creative work can bring to me, otherwise I'm the original easily distrac..."Squirrel!"

It was a nice piano, a Yamaha baby grand, great action, a delight to play around on. When I got up from it there was a little burst of applause which also surprised me since I thought I was playing so quietly and folks were busy talking and socializing that no one even noticed. A sweet moment for someone who rarely plays privately, let alone publicly. 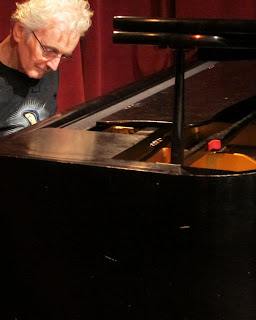 Nice photo. Wish I had been there.

you play a Bill Evans tune?

of of his album: Conversations With Myself?

He hung over the key-board almost as you are here doing!

Wish you had been too tpw,.

And anonymous, Evans was one of my trinity of piano icons, the other two were Monk and Ahmad Jamal. It's the latter I sound most like, maybe because he was easiest for me to imitate as a kid. But the way Evans hung over the piano definitely influenced my playing posture, so bingo.

And you play the piano, too. Wow.

OMG! Is that Rutger Hauer at the keyboard?

I love this pic!

Rutger Hower?! I thought it was Clint Eastwood!