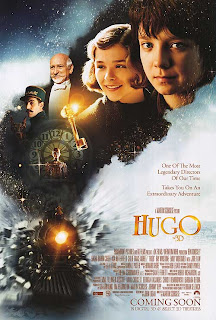 Finally got to see HUGO. Not the 3-D version but on the big screen. I can see why it got nominated for Best Picture. Not only did Scorcese direct it, but he has a little cameo as a photographer, and Johnny Depp has a silent cameo as a Django Rienhardt character. And Ben Kingsley is superb as always as the great silent filmmaker Georges Melies and Christopher Lee kicks butt as an old book seller.
Lots of fun performances, especially the lead kids, Asa Butterfield and Chloe Grace Moretz. I even liked Sasha Baron Cohen who can get on my nerves usually. But the main reason I can see why it got nominated for Best Picture is exactly why some critics said it did, because it's about making movies, actually the history of making early silent movies, especially the first "special effects" ones created by Georges Melies. It's a paen to him and the art of early silents from Martin Scorcese, as the book it's based on THE INVENTION OF HUGO CABRET is a paen to them from its writer Brian Selznick.
But beyond its grounding in film history and fun and at times very moving performances, it's a beautifully shot and conceived film, for my taste, and well worth seeing, at least on the big screen. And though I still prefer THE DESCENDANTS and MIDNIGHT IN PARIS as the better movies, I'm glad HUGO got some recognition for the effort and accomplishment of a master filmmaker trying his hand at something very different, for him, and I think for us in the end.
Posted by Lally at 10:44 PM

JIm said...
Obama owns 8.3% unemployment and a real unemployment rate of 15%, counting the the 5 mil fewer employess since Obama took over. The "recovery" is the worst since the 30s. Only an idiot would count Obama's ecomonomic policies as effective, unless that idiot wanted America to become a coummunist country.

JIm said...
Obama owns 8.3% unemployment and a real unemployment rate of 15%, counting the the 5 mil fewer employess since Obama took over. The "recovery" is the worst since the 30s. Only an idiot would count Obama's ecomonomic policies as effective, unless that idiot wanted America to become a coummunist country.