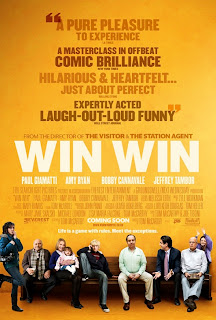 Friends have been raving about this film since it first appeared last year, but I only just finally caught it last night on cable. Now I can see why.

It's kind of the indie BLIND SIDE, the feel good almost true story of a young athelete from troubled circumstances being rescued by the well meaning family etc.  But even though BLIND SIDE is more real in terms of the facts it's based on, WIN WIN feels more real.

That's partly because of the lower budget look and feel, the indie spirit of the twists that make everyone look both "good" and "bad" or not so good, etc. But it's also because the family isn't as wealthy and the boy's circumstances not as unique (for one thing he's "white" as is the family that takes him in rather than the "black" kid taken in by the "white" family in BLIND SIDE making WIN WIN seem not quite as condescending to typical stereotypes).

But also because the mother and father are played by Amy Ryan (who kicks major acting butt as usual) and Paul Giamatti. The boy, like the actor in BLIND SIDE is a newcomer playing a wrestler and cast because he is a high school wrestler, or was. His name is Alex Shaffer and with the help of the two adult actors mentioned along with Bobby Cannavale (who almost steals the film himself) and Jeffrey Tambor, Burt Young (who I'm not always crazy about but who has some fine moments in this flick, along with some more mannered Burt Young moments) and Melanie Lyskey (playing the boy's troubled mother, an actress I and most of us first recognized the genius of when she appeared with Kate Winslet when they were teenagers in HEAVENLY CREATURES) he (newcomer Alex Shaffer if you've forgotten after all these parenthetical interruptions) has a powerful screen impact.

And even though I was bothered that they cast Paul Giamatti to play a character called Mike Flaherty, a Jersey Mick like me and my clan and Giamatti came nowhere near even approximating that for my taste, and the locations were obviously, to me, not actually in Jersey (turns out because our Republican governor Chris Christie decided to cut tax breaks for small TV and film production in Jersey so he could give bigger tax cuts to gazillionaires the producers had to go elsewhere, New York state I believe) and it bothered me that people would watch this and think they were getting the real deal...

...Despite all that, the performances were almost uniformly great, the story was believable and interestingly varied enough to feel real, and the resolution was real enough to feel plausible and not all Hollywoody and yet still leave you feeling good and satisfied, I was very happy to have watched it and probably will again if it pops up some time in the future.
Posted by Lally at 8:46 PM