GETTING READY FOR POETRY MONTH (OF WHICH THERE ARE TWELVE)

I guess the idea of naming a month for something brings more attention to it. And I can guess why they picked April for poetry. But I read and write poetry pretty much every day, and have all my adult life, and a lot of my pre-adult life as well.

Here are three poetry books I recently read that were worth checking out for me:

SAVE TWILIGHT by Julio Cortazar (translated by Stepehn Kessler). Cortazar is an Argentinian author best know for his fiction, especially his novel HOPSCOTCH. Published by City Lights, I expected SAVE TWILIGHT to be more raw than at times Kessler's uneven translation is. But some of these Selected Poems are a revelation. As in this brilliantly translated line from "Clearance Sale"—

"I close my eyes and I'm laid out in your memory, barely alive,
with my mouth wide open and the river of oblivion rising."


AN UNCHANGING BLUE is another Selected Poems (1962-75). This time from the German poet Rolf Dieter Brinkmann and translated by the American poet Mark Terrill, who has lived in Germany for many years (and whose own BREAD & FISH is one of my all-time favorite books of poetry).

Brinkmann was a poet of my generation, influenced by "American" poetry, especially by William Carlos Williams, Frank O'Hara and my old friend the late great Ted Berrigan. Born in Germany toward the end of WWII and growing up in postwar ruins etc. may partly explain the grim sense of humor, or humorous sense of grimness, his poems express. But nonetheless they resonate with life in spite of themselves.

Here's a short one, and as usual with his poems the title is the first line:

or even
several. One after the other.
An entire flower bed.

And again sentences.
Others. Other
flowers, for once and for all.
Finally.

Flowers, which
extend roots—
the question would remain
what for." 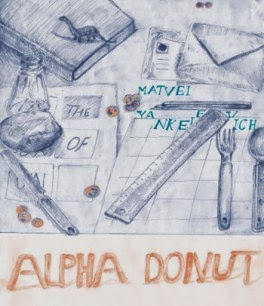 ALPHA DONUT by Matvei Yankelevich was a pleasure to read, for me. It reminded me of an early book of mine, ROCKY DIES YELLOW, which included a variety of approaches to poems that at times seemed fragmentary or structurally incompatible (as it turns out in ALPHA DONUT this is the result of many of the short pieces being fragments from disparate, or at least separate, longer works).

But this "Selected Shorter Works Of Matvei Yankelevich" is totally original. With only a few exceptions, every page rewarded me with a surprising use of imagery or language and all in a accessible even conversational way that too much of contemporary poetry mishandles.

I'm not wearing your hat."


"Why would I live so long? Who wants to watch their friends grow up into the people who publish a book a year, or have their 'work' represented by a gallery and talk about whether it's selling, and to whom. No, I don't want to see my friends grow up like that."

A lot of it is clever in ways that gives clever a good name again. Like this mini mash up of modernism most poets, or at least this one, will smile at:

"only the red (wheel

"APRIL is the cruellest month, breeding
Lilacs out of the dead land, mixing
Memory and desire, stirring
Dull roots with spring rain."

That's what I had in mind Willy, and Chaucer and a few other April references in poetry history...

Of course I had to google this but -

Whan that Aprille with his shoures soote
The droghte of Marche hath perced to the roote,
And bathed every veyne in swich licour,
Of which vertu engendred is the flour;

I really enjoyed studying Chaucer at school, not that I remember much of it after all this time (which really doesn't seem all that long ago...)