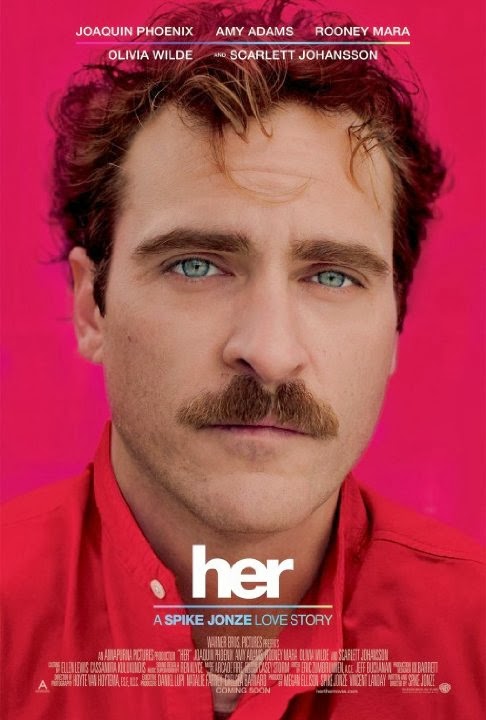 A total tour de force. I'm not crazy about Joaquin Phoenix, though many of my female friends are, but he won me over with this incredible performance. I AM crazy about Scarlett Johansson and went to see the flick for her, even though it's only her voice that's the other lead in the film. But what an amazing performance she gives with it, making her character, the voice of a computer operating system, as real and vital and nuanced and emotionally complex as any embodied film character ever. Johansson deserves some kind of special Oscar for this.

And Phoenix, acting in most scenes either totally alone or only with Johansson's voice is also remarkable. As is the always reliable Amy Adams in a co-starring role. For my taste there wasn't one missed beat in this flick, which means the writing and directing (both by Spike Jonze) were perfect. In fact, if I were giving out awards, Jonze would win at least for best screenplay.

The physical scope of the film is confined, but the subject matter opens up so wide it ultimately encompasses deep and confounding questions and challenges about the meaning and purpose of intelligence, life, love and being human. Yeah, got a little heavy there, but the film, with the help of a great soundtrack by Arcade Fire and a lovely main song (that I think is nominated for an Oscar) written by Karen O of the Yeah Yeah Yeahs—"The Moon Song"—and sung perfectly by Johansson, does not come across as heavy but rather as satisfyingly humorous and poignant.

Listen, it's definitely worth seeing, and in a year without the many great movies of this Oscar season, could have easily won several of the top awards. But unfortunately for this film, it's overshadowed by movies that have more bells and whistles or just seem to address deeper subjects, though none do, ultimately, I feel.
Posted by Lally at 10:40 PM

Glad to read he won you over. Did you see Walk the Line? He won me over with that performance. Scarlett sure is a beauty too-

she is, though in HER we never see her and I appreciated what Phoenix did in WALK THE LINE, I was disappointed in the casting, yes good acting but I could never forget it was this little guy acting like he was a big guy and this to me totally uncharismatic actor pretending he was this incredibly charismatic real star etc. etc...just my take...

I wanted to see it before but now I must. Same with 12 Years a Slave, on smaller screen I don't think it'll break my heart as intensely as on the big one. We'll see.
Caitlin

Yeah, if you can see 12 YEARS A SLAVE on big screen that'd be best, but either way...I think Miles said HER is playing in GB right now...

I'm remembering that Joaquin was more than excellent in "The Master." He and the late Philip Seymour Hoffman played off each other to perfection.