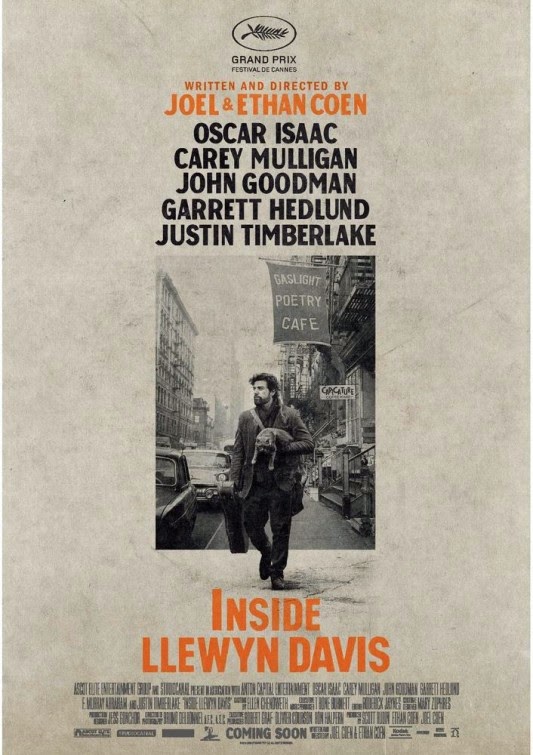 Finally caught this flick. People had been telling me to see it and wanting to know what I thought of it since I was hanging around The Village at the dawn of the '60s during the time this flick is set, although I was hanging with the jazz scene and was pretty narrow minded about the folk scene (I saw it as white college kids pretending to be poor white Southerners from some earlier time so to me at 18 and 19 and 20 it seemed phony—I didn't even dig earlier variations of "jazz" I was such a purist at the time).

At any rate, the few times I dropped by the Gaslight to catch a poet I don't remember it being like it is in the flick, and some other stuff (like some of the language and attitudes) seemed out of place for that time and scene to me. But I know there are people who totally dig this film, and I have to say I'm not one of them.

The Coen brothers have always been hit or miss with me, and INSIDE LLEWYN DAVIS is a big miss. Of all the movies that could be made about that time and place they had to do this one, one of the most depressing and cynical flicks I've seen (though maybe not as preposterously cynical as NO COUNTRY FOR OLD MEN).

I needed an escape tonight and made the mistake of watching this. There are plenty of dark themed movies that I can watch and be taken out of some of the more challenging realities of the day, but not this one. I kept thinking, Are you kidding me? The John Goodman character was such a parody of that kind of music man, and the driver too, of the poets I knew in those days. Just one distortion after another. I'm sure with some aspects of truth, but there didn't seem to be any redemption at all for anyone, just ill deserved possible success for sellouts.

Anyway, it's late, this could turn into a rant, which would just add to the depressing mood this movie inspired. So, if you haven't seen it and want to, good luck.
Posted by Lally at 11:58 PM