A FAST LIFE: THE COLLECTED POEMS OF TIM DLUGOS 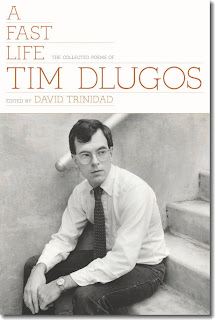 A great night -- with fantastic readings of Tim's poems by all. That book is MAJOR!

Oh man. I need to get this book. "Silverchest of night."

Dear M: It was a memorable night, for sure. The book is so extraordinary. Some people seem to fade pretty quickly after they're gone, but Tim seems to be still so much with us, and that's because of the life within these poems. Thanks for this great report on him & on the event.

Yes, the event was fine and Tim's work was, is and always will be among the best. The "Collected" is a must!