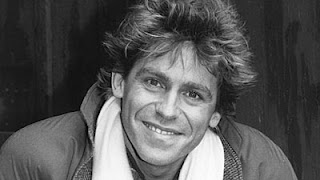 Jeff Conaway is being remembered mostly for his roles in the film GREASE and in the TV show TAXI. But I first met him in 1985 when I got a small role on the first episode of a TV series set in a department store called BERRENGER'S. The role went on to be expanded into a significant part of the show, putting me in every episode, while Jeff's leading role was reduced to nonexistent.

It was explained to me that Jeff wasn't showing up and the powers that be decided to basically write his character out of the show. It was clear he was having problems even back then, obviously. But even so, the guy was impossible not to like. He was a genuinely nice guy.

We became friends for a while later in the '80s and early '90s through our shared loved of poetry. He wrote some himself. The man I came to know then was sincere, earnest, well-intentioned and even innocent in a way, despite his travails. I never saw any display of ego or even self-centeredness, though I never really saw him in the thrall of his demons and can't say what that may have been like.

The man I knew was a great guy to hang out with. His tragic decline ending in a coma and death is heartbreaking. I'm grateful I chose, and choose, not to watch shows that exploit the addictions and mental problems of real people, so I never saw his appearances on that supposed rehab show some of his obituaries refer to. So I can remember him as a real sweetheart of a human, a gentle and even fragile soul who I wish had found the help that might have saved him.
Posted by Lally at 11:11 PM

Life is different for everyone. I was able to give up all consumption cold turkey long ago, because I discovered the power of getting high on life. I wish others could discover this, and that hiding in intoxication or stupefecation is just that: hiding.

Although it doesn't seem possible now, I hope he's remembered by friends like you than by the hucksters who exploited him.

I hear ya Robert, and thanks K.