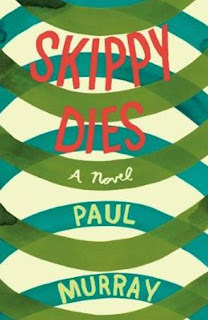 I don't read as many novels as I used to. I prefer bios and memoirs and histories and poetry etc. And the novels I do read are mostly by writers I already dig and a new translation comes out (Roberto Bolano, Irene Nemirovsky et. al.) or I often reread novels I know well and still get pleasure from ( Joyce's PORTRAIT OF THE ARTIST AS A YOUNG MAN, Jack Kerouac's DESOLATION ANGELS etc.).

There are exceptions, new novels from friends or others who ask me to write a blurb or a post about them. And then there are novels that family or friends recommend or give me as gifts. Rarely do those capture my attention and satisfy me as much as they have those who recommended them.

But when my old friend Tom "Willy" Wilson sent me this novel—SKIPPY DIES by the young critically acclaimed writer Paul Murray—and I opened it and began reading, I felt a thrill of excitement and anticipation I hadn't felt in decades. As I wrote to him, it was like back when I was in my early twenties and married to my first wife, Lee, and not yet college educated (I was still in the service) but moving beyond my autodidact intuitive discovery of books and writers I dug to following the recommendations of  my wife and my new and first "intellectual" friends who turned me on to books that I would get lost in and be inspired by, like when my friend Roy Harvey turned me on to Rilke's THE NOTEBOOKS OF MALTA LAURIDS BRIGGE, another novel I continue to reread in various translations every few years and continue to find inspiration and satisfaction in.

SKIPPY DIES isn't an easy read, but the challenge is partly what excited me when I started reading the first few pages. And it demands a big commitment—it's 661 pages before you reach the end. But it's a compelling story, set in an Irish boys boarding school and environs with a large cast of characters. Some are more memorable than others, and some come across as more sketched and sketchy than others (or more representative of a type).

But there's enough original and real characters that I became engaged with their stories and wanted to know more. It took me a while to finish, but the past few days as I neared the end I became obsessive about it, staying up until almost three this morning reading until my eyes grew too tired and then finishing it a few hours when I woke up unexpectedly thinking about it and wanting to find out what happens!

But it's mostly the language and the narrative drive that captured me, reminding me, like I said, of novels Lee and I became engrossed in back in our twenties and beyond, not as original or seminal as Laurence Sterne's TRISTAM SHANDY or as lightweight as Donleavy's THE GINGER MAN, but maybe a marriage of some of the better qualities of each (and a few of the lesser qualities of the latter).

I have to say I enjoyed the process tremendously, and my old friend Tom was right, when he sent it to me and I reminded him I don't read novels much anymore, he told me he knew that but decided that it would be good for me to work that part of my brain again (only he said it more succinctly and clearly) and it was. If anyone's read it too, let me know what you thought, or if you do, what you think.
Posted by Lally at 1:51 PM

You guys ACTUALLY got through TRISTAM SHANDY..?
That used to be my 'go to book,' to shut my mind down, when it was keeping me awake. My mind accepted defeat within 3 pages.

Yep Suzanne, and the crazy thing is, I've reread it a few times since!

Here is what I said in reply to your thanks, after you received the book, but before you started reading it.

"You are welcome. I know that you don't read a lot of fiction and that is exactly why I gave it to you. You need to read a little fiction now and then just to have some guilty pleasure and to stimulate that part of your brain. Love you too, brother."