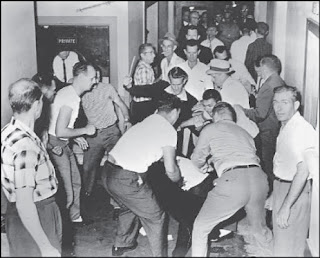 Hope you caught the PBS "American Experience" documentary FREEDOM RIDERS tonight, and if not that you catch it when it's aired again or somehow get a hold of it. After seeing it (and while watching it for that matter) I thought this should be a mandatory class in every school in this country.

What a shining moment that was in our history and what an example were those mostly young people who risked their lives in a nonviolent action against segregation that led to their being berated, beaten and imprisoned.

I remember the summer of the Freedom Riders well, and found myself only a few short months later stationed outside of Greenville, South Carolina, which by the time I got there was the last state still completely segregated and not facing the kinds of news scrutiny that the Civil Rights campaigns had brought to the rest of the South.

I got involved in my own personal freedom rides when faced with segregated buses, as well as segregated restrooms and all the horrors that existed before brave souls like the Freedom Riders refused to be a part of that abomination that was the pre-Civil Rights South.

But I didn't know the full story, or remember quite accurately the impact it had beyond the many Civil Rights stories of the time, including part of my own. This documentary tells this story so well it didn't just bring back the emotions and challenges and conditions and potential of those times, but evoked even stronger emotions about the connections to our own times and to the hope our present president brought to all of us when he won the election.

To watch the segment on 60 MINUTES last night about the Sovereign Citizens movement and then tonight watch FREEDOM RIDERS and see again white Southern racist mobs attack non-violent mostly college students because they believed "non-whites" should be able to use the same bus stop restrooms and waiting area as "whites" was to watch the same kind of irrational hatred and rage and evil resist our common humanity for a belief only in their own like-minded lies and distortions about what this country and its founding documents really mean.

And there's a direct line from Fox News and other rightwing outlets screaming about "Common" being invited to The White House because they deliberately choose to misread and mishear and misinterpret his stand AGAINST VIOLENCE while inviting Ted Nugent onto their shows and not condemning him for rants about how our democratically elected president can suck on the barrel of his machine gun and so can that "worthless b*tch Hilary Clinton" and worse. [Jon Stewart has addressed this with clips showing it on recent shows and again tonight.]

There's a direct line from that kind of hypocritical prima facie racist distortion of reality to the Sovereign Citizens and right back to those screaming vicious cowardly mobs beating up on defenseless nonviolent students in 1961 simply standing up for what the Constitution promises them as citizens of this country.

If you can find a way, watch this documentary: FREEDOM RIDERS.

I watched this documentary last night in horror! I was Shocked that JFK invested very little energy in the movement until the freedom riders were in serious trouble. After just finishing the book "The Help" and then catching this doc, I'm embarassed for our countries past.

I agree, a must see for all students.