TOO BIG TO FAIL

This HBO movie adapted from the book (that won critical acclaim, the book) has more names in the cast than I think I've ever seen in any TV movie, and more than most Hollywood big screen movies.

As you probably already know, it's the story of the bank failures and initial bailout. William Hurt plays Hank Paulson. He gets a lot of the physical presence, and in a few scenes the steely sense of infallibility. But to my mind Paulson came across like a white collar gangster from the first time I saw him interviewed long before the bailout. Hurt is way too WASPy for that, plus given Hurt's evasiveness when he acts, as if a lot of him is somewhere else we'll never penetrate, his characterization just didn't work for me most of the time.

But it was also the fault of the writing, which gave us no one to connect with emotionally. It tried with Hurt/Paulson by having him appear in private to be more insecure and even tried to suggest he was frightened, though hurt didn't play that well at all and I didn't buy it for a second.

Topher Grace plays his top strategist and Cynthia Nixon his p.r. woman, and at least they came across as valid possibilities. Nixon even had me wondering who she was for a second when she first appears. James Woods plays the head of Lehman Brothers and does his usual great job of playing a character that is at once pompously cocky and self-centered as well as a ultimately a weasel. 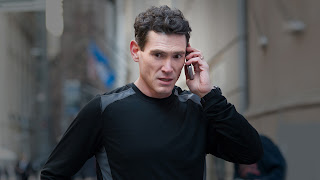 And there are scores of others playing lesser roles, including Billy Crudup, almost unrecognizable to me as Timothy Geithner and Paul Giamatti as Ben Bernake. Ed Asner has a few good scenes as Warren Buffet and Kathy Baker has the thankless task of playing Paulson's wife with few good lines a few of which seem to intend to convey some emotional connection to Hurt's Paulson, but they both left me cold and not believing them.

Then there's so many more playing the various heads of the Wall street financial institutions, including Matthew Modine, Bill Pullman, Tony Shalhoub, etc. All of whom had a few small scenes that they did well, but again, not enough to connect to. Making the entire movie seem like a lesson rather than a drama.

One of the best performances was Michael O'Keefe's (full disclosure, he's an old and dear friend) as a numbers man who the CEOs don't like having to rely on. He was one of the few actors who seemed to be playing in the real story of what happened. The deceptions and hypocrisy and greed and arrogance and denial...

If you accept the movie's premise and resolution, the incredible catastrophe that occurred in 2008 that almost brought on another Great Depression was just a matter of almost happenstance not bad intentions based on greed, and it was resolved by Paulson's getting Congress to okay the initial Bush administration TARP funds bailout of the big banks.

It ends with the stock market turning around and Paulson and his minions trying to convince themselves that everything would now work out but having their secret doubts.

It should have ended with the reality that the brief upswing in the market didn't last and it continued to plummet at an even greater rate and shown how when Obama and his people came in they were told it was actually worse than anyone outside the Bush/Cheney gang knew. That would have been more dramatic and more true.

It also would have helped to expose the narrow-minded, shortsighted, short term profiteering at the expense of the rest of the economy and us that went on at the highest levels of Wall Street and shown some of the real human cost of these egotistic jerks' greed. The audience could have identified with being the victims of that.

As it was, it didn't work on any emotional level, not even in showing us how bad it really was, nor did it work on exposing the truths behind the collapse. It was just a chance to see a lot of well known actors workout a little, some successfully, some not.
Posted by Lally at 11:35 PM

I don't know if I have the heart to watch anything about the crime of the century but whenever I see anything with Michael O'Keefe, I think he's always the best thing in it.

I objected to the way Paulson came off as some kind of hero, who worked so hard to deal with a congress that was strong and had it's own mind and could not be rolled over. Would that that were true about congress. It was probably just a few phone calls and the sheeple in congess gave them a big blank check.

the crime began during the clinton administration. when brooksley born went to shut down the the derivitive shinanigans, rubin, summers, geitner, braenake, and greenspan marched up to congress to have them strip her of her powers to do that. when one congressman asked with bewildermwnt," what are you trying to do!?" she answered. " i'm trying to save the PEOPLE their money"
when obama appointed summers, geitner and braenake to his financial team i knew that ' yes we can' became, but we won't