Time for a change of pace and subject matter. As I have written many times on this blog and elsewhere, it's always been the arts that have saved my sanity, even my life. So getting back to more creative and artistic endeavors, may I say at the start: See this movie. 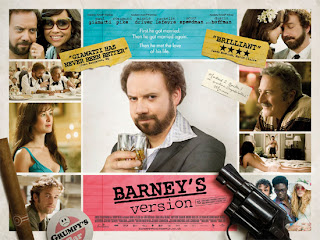 I started a mini film fest a night or two before the Arizona tragedy. I'm trying to get through the DVDs I've received from studios and producers looking for my vote for the various movie awards this season. I'm sorry that I forget sometimes that the movies haven't come out yet so my reactions to them (I try not to give away plot points) are often way premature.

But I believe BARNEY'S VERSION comes out in a few days. It was one of the DVDs I was going to watch out of a sense of obligation, because I haven't been crazy about Paul Giamatti's more recent efforts (I thought he was miscast in that John Adams series on HBO and thought his work was predictably mannered in the movie about Tolstoy's last days with Helen Mirren and Christopher Plummer).

So I slipped this into the DVD player, soon to be an antique curiosity I'm sure, and expected to be underwhelmed. At first I had the same reaction I've had a lot recently, or even in recent years, to the casting of schluppy (is that even a word?) pot-bellied men in relationships with attractive, even stunningly attractive, women. But I've reconciled to the reality that oddly matched couples are not unusual at all (I've been half of one often enough myself, as in the older, getting out-of-shape guy with the younger hottie etc.).

So once I got through my initial resistance I began to be seduced into the world of this film and its unique rhythms. And by the time I was finished watching it I was so taken in by the story and so impressed with its artistry, it is now vying for my favorite movie of the year award, and Paul Giamatti's performance is definitely the one I'm voting for as best actor in a film for 2010 (they open these films for a few days to make it eligible but obviously it comes out for real, as I said, in a few days).

The story is based on a novel by the late Canadian writer Mordecai Richler (the "Canadian Philip Roth" as he's been called). I haven't read the novel so I don't know whether to credit him or Michael Konyves, who adapted the screenplay, for the beautiful way the movie moves through time. I assume the characterizations are Richler's achievements, but it's the director, Richard J. Lewis, and the actors who deserve the credit for the way those characters play out on screen so perfectly (rather than as the caricatures they so easily could have become).

Some of those actors are familiar, like Minnie Driver and Dustin Hoffman, but because these two, for instance, are cast in ways they usually aren't, their performances seem even more brilliant. And Rosamand Pike, who I've seen in films before, becomes a true movie star in this role, moving to the top of my list of beautiful stars who evoke the glamor and poise and depth of some of the greats of classic Hollywood (in this film she reminded me most of the kind of presence Greer Garson had on screen).

Another familiar face who rises to the level of "movie star" in his smaller role is Scott Speedman, whose charm and good looks puts him somewhere between old style handsome leading men and the more recent flock of leading boys who never seem to achieve true "men" status. I look forward to seeing where he goes in future flicks.

It's been almost a week since I watched BARNEY'S VERSION, and obviously there's been a lot going on in the world, and here in Jersey as well (like the new snow storm on its way later today), but I cannot shake the impact of this movie on me, emotionally, intellectually and artistically. I've actually wanted to watch it again since the night I first watched it. I suspect it's the kind of movie I will in fact watch again many times over the coming years.
Posted by Lally at 12:26 PM