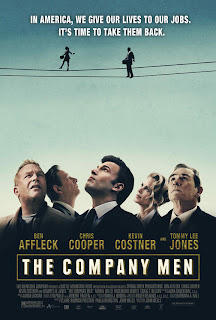 THE COMPANY MEN was written and directed (as well as produced) by John Wells, whom I knew in my Hollywood years as a very nice, unassuming man. He produced a play I was in when I first arrived out there, and later he wrote and produced TV shows (starting with CHINA BEACH though hits like THE WEST WING and  the one he had the most responsibility for: ER), some of which I auditioned for episodes of and never got, though he always treated me with respect and courtesy.

Even though we both knew I had acted out during the play when we were both starting out, because of an issue with my then second wife. He didn't fire me that time, but I'm sure he made a mental note to not hire me again. Despite that pure speculation, I like the man and what he creates.

But this is his first time writing/directing and producing a movie.

THE COMPANY MEN is kind of a coda, or PS to UP IN THE AIR. That is, it's a continuation of the story of the impact of corporate downsizing. In UP IN THE AIR it was mostly about those who did the downsizing, and the filmmakers (mostly Jason Reitman) produced what I consider to be a terrific work of art.

THE COMPANY OF MEN is mostly about those downsized, and though the characters are solidly written and beautifully acted, they are at the higher end of the corporate food chain and thus, from my perspective, more difficult to identify with. Affleck's character is the one we are meant to identify most with and he does a great job, especially aided by Rosemarie DeWitt playing his wife and Kevin Costner in an almost thankless role of his brother-in-law (Costner has been doing really fascinating work as an actor since relinquishing his leading man status, this role alone was worth watching the movie for).

But Affleck is terrifically supported by the entire cast, including Tommy Lee Jones, always at the top of his game no matter the venue, and ditto for Chris Cooper who has one of the most difficult portrayals in the film and pulls it off with his usual intensity. The big surprise for me is Craig T. Nelson, who I knew casually in Hollywood and liked, but discovered here a new dimension to his acting chops, which has to be credited to Wells' directing.

So Wells did a great job casting and directing, and as a once movie actor I appreciate that totally. As for his writing, in THE COMPANY MEN, it's good, though a little obvious, with the weak point being that he's viewing the recent economic troubles through the lives of those, like I said, on the higher end of the food chain, making them seem almost more vulnerable than those at the lower end.

Maybe that's just the result of Wells having been at the higher end for most of his career and seeing the vulnerabilities and precariousness, even there, more clearly, writing about what he knows best. And the writing is, for the most part, really well done. Despite the inevitability of some of his characters' choices and outcomes, there's a lot of subtlety to the individual scenes. The cinematography seems a bit washed out, which may just be a result of shooting it digitally (I don't know if that's right or not) and/or may be intentional to give the feel of lives being reduced to less than they were etc.

But in terms of my comparison to UP IN THE AIR for instance, it makes THE COMPANY MEN seem less artistically ambitious or accomplished, for me. But those subtleties I referred to redeem it. Like a scene where people in the corporate parking lot carry boxes with the contents of their desktops and drawers to their cars. It's shot from the perspective of a higher up worrying about his own status as he looks out the window, but from an angle that at first allows us to only see one person, and then slowly realize there are others. But rather then make that any more obvious, Wells chooses to keep most of them out of the frame and therefore the audience's perspective, just enough to know what the character who's looking out the window is seeing, a much larger (and deadly silent, from this window) exodus.

There are many scenes that are directed and written (or perhaps later edited) to keep the emotional perspective personal and not strident. And in the end, Wells can't resist a bit of uplift (unlike UP IN THE AIR), so the film feels pretty satisfying, though smaller than it could have been.

I would recommend it just for the acting, especially, as always, Tommy Lee Jones. Though I did find it difficult to accept Maria Bello as Jones's character's lover. She seemed miscast, only because Jones looks so much older and physically less vibrant or attractive than he ever has before. I know there are relationships like that (obviously, I've been in them!), but it still was jarring to notice how much Jones's shoulders seem to have diminished and his gut grown while his character is being projected as the object of attraction for this obviously much younger and model attractive woman.

But Wells has trouble with Affleck's character's wife as well, portraying her as much more accepting and willing and understanding and supportive and never worried or depressed by the family's financial downfall than any woman I've ever encountered, no matter how working-class or even poor their background may have been.

But aside from those caveats, or despite them, I was engaged throughout this flick by the acting alone, and other rewarding aspects of the film only added to that engagement. Check it out for yourself when you can and let me know what you think.
Posted by Lally at 12:33 PM