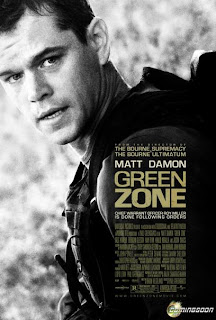 Friends have recommended this movie ever since it first came out. The critics dug it too for the most part. Some comparing it to the BOURNE trilogy flicks. I finally caught it last night on cable, and can see what everyone liked about it.

It doesn't really compare to the BOURNE movies, except in some similar editing in the chase scenes and action scenes, and it stars Matt Damon in a mostly exotic setting. But GREEN ZONE isn't as fun an action flick as any of the BOURNE movies, which to my mind are classics of that genre. But it does create enough of that action thriller tension to have made my leg jumpy as I watched it, at least in the action scenes.

GREEN ZONE has its own attributes that make it a movie to see as well. As you probably already know or can guess from the title, the film is based on reality, the reality of the early part of the Iraq War when our country's civilian governmental representatives in Iraq were making one miscalculation after another and all from the comfort and protection of the "Green Zone" while soldiers like the one Mat Damon plays dealt with the actual reality of the situation in the rest of Iraq that wasn't going anything as predicted by these same representatives and their cohorts and bosses back in Washington.

Damon continues to surprise me as one of our most versatile movie stars, and one of our alltime greatest. He may not have the same charisma of a Bogart or a John Wayne or the looks and screen presence of a Gable or Cooper or even Brando, but the man can hold the screen and make you believe his character is really doing those things and pulling them off, or not. And he can do it in comedies, action flicks, thrillers, docu-dramas, melodramas, etc. etc. etc.

So, GREEN ZONE isn't the best movie of 2010, nor the best movie about the Iraq War, but it's still a really good movie that should be seen not least because it may be the clearest nondocumentary filmic expression of what was so wrong at the heart of our government's policy that brought us into that conflict and has kept us there so long.
Posted by Lally at 11:32 AM

You are right about Damon. You are also right about "Green Zone." A similar, but even better film in that style, (concerning a different "war") is "Black Hawk Down." I've seen "Black Hawk" three times and each time I was on the edge of my seat, but each time I saw (and heard) things I had missed in the prior viewings. Green Zone is reminiscent but not quite as good. But then again, Green Zone was not directed by Ridley Scott.

Thanks Tom, I've only caught pieces of BLACK HAWK DOWN, but will try to catch the whole thing from beginning to end next chance I get.