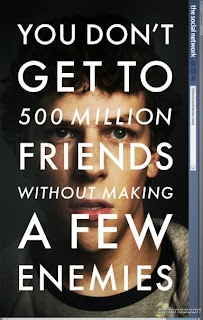 Hard to deny this is a terrifically made movie. Aaron Sorkin's ability to write vibrant dialogue (as we all learned during his days writing The West Wing) has not diminished, as evidenced in the opening scene of this movie, which is like a very short one-act play with two characters, Jesse Eisenberg playing Mark Zuckerberg and Rooney Mara playing Erica Albright.

It had me smiling with satisfaction and anticipation, knowing I was in for some great film making. But it also immediately raised one of the two major caveats I have about this film. That it's an excellently made movie, both in the writing and direction—which includes the acting, especially the leads, like an already much noted tour de force turn by Justin Timberlake as Sean Paker—is a given, but that it represents the true story of Facebook founder Zuckerberg's personality and life during the period covered, is not so solid.

As others have noted elsewhere, Zuckerberg went to an elite prep school where he not only was into computer technology and programming, but was a classics scholar as well, reading Greek and Latin, as well as captain of the fencing team.

From what I've read, he not only had a wide circle of friends and interests, he also during the time the movie covers, had a very attractive and accomplished steady girlfriend (who happens to be Asian-American and who he now lives with as she finishes her medical studies), and had no burning desire to be in an exclusive Harvard club or hang around with or get revenge on the wealthy WASP "legacy" students (children of alumni etc.).

And yet THE SOCIAL NETWORK not only portrays him as a monotone figure who's total focus on Facebook is a result of these drives—to avenge not being among the elect and to impress girls who he otherwise is portrayed as too nerdily socially dyslexic to have any success with.

Oddly, the only sexual contact/conquest the movie depicts of Zuckerberg's is a spontaneous encounter with an attractive Asian-American student who is portrayed as a groupie/fan of his Facebook creation and treated like a groupie by him in the movie, used and discarded.

Which brings me to the other caveat I have about this flick, if I were an Asian-American woman I'd be pretty offended by the way Asian-American coeds are treated as single-mindedly in pursuit of Jewish-American nerds with successful computer skills that make them look like future big-money-makers.

Brenda Song has the thankless role of the most extreme version of this, as Zuckerberg's original partner, Eduardo Saverin's, (more like financier, played by Andrew Garfield) witch of a girlfriend. I recognized Song from a Disney kid show my youngest used to watch incessantly, and whether it was that or just the way the role was written, I found her acting the weakest in a movie with almost no weak links in the cast (one of my favorite roles was of Zuckerberg's lawyer "Sy" played by my old friend John Getz, a seasoned actor you have probably seen in numerous roles on TV and in film, but he first made his mark as the lead in BLOOD SIMPLE).

So, THE SOCIAL NETWORK is a really terrific movie, like I said, but it is a bad rendition of a real person's life and motivation. My take on Zuckerberg is that like many artists and other creators he's motivated not by some obvious and easily dramatized personal agenda like getting back at the girl who rejected him or getting even with the WASPs who act superior to him, but by doing something that excites his interest and challenges his intellect and skills and that often turns out to be original, or innovative and has an impact on those who encounter it, no matter how many or few.

But as we well know by the dearth of films that actually convey that kind of motivation and process, it is very hard to make work as drama, without either making things up or focusing on extraneous but more dramatic stuff like addiction, alcoholism, sexual or romantic betrayal etc. In fact, I can't think of any film offhand that truly captures the spirit as well as the reality of how most creators I've known do what they do and what inspires them to do it.

So, if you haven't seen this movie, it's well worth watching, just take the characterization of Zuckerberg and his moment of inspiration, and the process that that led to with a grain of salt, as they say (though I haven't any idea why they say it). And maybe write a letter to Sorkin and David Fincher (the director) pointing out how biased the film is toward young Asian-American women.
Posted by Lally at 1:54 PM