I just heard that the painter Bill Sullivan has passed. Bill was a longtime friend who unfortunately I hadn't been as closely in touch with in recent years as I used to be. He wasn't an artist who followed trends. He went his own way and it was a way I much admired.

His art was in many ways contradictory, as was he. The mix of qualities seemed to contradict each other in ways that may have left some missing the uniqueness of his work. I identified with that myself, whether justifiably or not.

He was the same way in person, an extremely tall man whose physical presence alone made him seem like the literal "grown up" in many situations, yet with a childlike face (not untypical given his Irish heritage) and a manner just the opposite of "overbearing"—as some physically dominant people can sometimes be.

He had a sharp wit coupled with a basically gentle spirit, and his art reflected all those qualities and more.

I knew him best in my New York days, but after I moved to Southern California in 1982 we kept in touch and I'd see him on my visits to Manhattan. Then he came out for a show in a gallery in the summer of 1990 and asked me to write the monograph for it, which I did.

Here's one of the more subdued pieces from that show (it was an edition of 12 screen prints hand colored with pastels, 18x36 inches, I have one hanging on my bedroom wall):

That's not really reproducing very well, unfortunately. The original is much smoother and more subtle. Scanning it has created those wavy almost pixilated lines through it (I'll try to find one on the web and add it below) At any rate, here is what I wrote about him and that show as he was in the process of creating it: 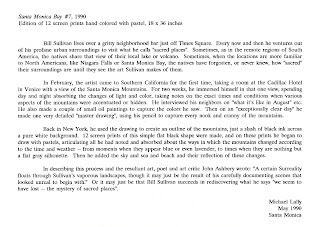 You'll be sorely missed Bill. I'm grateful we still have your art.
[PS: Here's another one of the prints from that series (on the right) and the only one I could find online, but you can see in it compared to the one above at least a touch of the beautiful variety he brought to this serial project, so controlled and yet energetic, subtle yet in its quiet way demanding our attention...I could go on but will resist.] 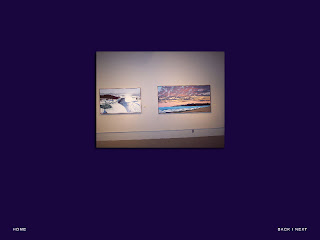 It's sad when a friend dies, sadder still when we've been out of touch, and as you say, Michael, at least your friend leaves a memento for future generations in his art.

Elisabeth, I think part of the motivation for a lot of people who create things, me included, is to leave something behind after we're gone. I remember a discussion with an old friend long gone, the poet Etheridge Knight, about just that, and him saying he didn't care what anyone thought of him after he was gone or if they ever read his poetry again and feeling almost shocked. Not me. I always wanted to leave some kind of imprint, some kind of record for my kids or grand kids or whoever comes after and might get something out of it, a trace of what it meant to be me and live in the times I was born into.

Michael, I was glad to read your memoir of Bill here; we had a big gathering for him last night in NYC, and there will be another in Albany on the 29th. I've posted a link to this page up on my FB profile. All best to you, Rosanne

Thanks Roseanne. Wish I could make the Albany gathering or have been there last night.