I have a good friend, Fred, who lives in Arizona. He called after the tragedy the other day, from his car on his way from his home there to L.A. (where he works as a Teamster), and mentioned as we were talking that a car just passed him with a bumper sticker that said "Guns, Guts, Glory"—a sticker he's seen many times in his home state.

He also informed me of something that I was hearing for the first time but have since read more about— though the mainstream media has mostly ignored it—that the Tea Party Republican opponent to Congresswoman Giffords, the victim of the attempted assassination, invited his supporters to "target" her on his web page and in the same ads and flyers in which he invited them to join him in an automatic weapons shooting party!

Here's an article based on his web site page (since removed) with the event ad below it as listed in the newspaper: 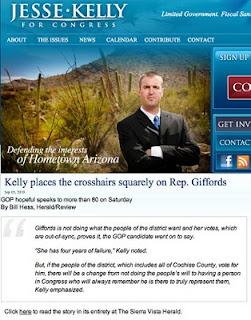 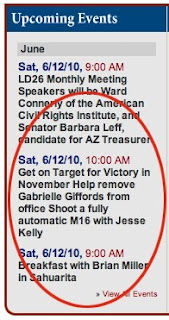 This is the atmosphere the tragedy took place in. No matter how you interpret the causes (I have already stated that many of the phrases used by the assassin in his confused Internet statements come directly from rightwing media sources, like his objections to our currency not being based on the gold standard etc.) you can't deny that including all this gun and targeting language (and symbols) in political ads and arguments along with contentions that your opponent is illegitimate (even though they were legally and democratically elected) creates an atmosphere where violence seems to be being promoted as a solution.
[PS: Here's another typical statement the shooter left on the Internet "...read The United States of America's Constitution to apprehend all of the current treasonous laws." That's right out of Beck (and Rush and many Tea Partyers), as is the shooter's rants about how our currency should be based on gold etc. So it seems clear to me on the evidence that even if the assassin's philosophy comes from many sources, there is no doubt that one of those sources is the rightwing media.]
Posted by Lally at 12:36 PM

Amazingly, you continue with your drivel,when the left's blood libel has been thoroughly discredited.

Someone who cannot acknowledge the truth and evidence that is undeniable is a punk. You are a punk and have lost any vestige of or right to my respect.

Your wife has far more character and integrity than you do - I don't know what she sees in you.

I'm gonna leave those two comments up, but let's try to keep it on the evidence and not the personalities if possible. All I was doing in this post was presenting clear evidence that Gifford's recent opponent used terms and symbols and symbolic events ("targeting" her in the same statement inviting supporters to fire automatic weapons) in a way that connects guns with politics not as a second amendment issue but as related inherently (certainly linguistically in terms of message) and legitimately (i.e. there is nothing wrong with using gun imagery and activity in an argument saying your opponent basically deserves to be eliminated). I was just as appalled by the West Virginia Democratic Governor's campaign ad that showed him firing a rifle (not automatic at least) into a copy of the "cap and trade" bill. I understood his feeling the need to do that in a campaign in a state where rightwing corporate interests were funding attack ads trying to posit him as not a typical West Virginian (even though his rightwing Tea Party supported opponent didn't even live in the state and was a privileged man of enormous wealth) because being a Democrat he must be a weakling out to take your money and your guns etc.

Political speech has been and is being regulated by folks such as Mussolini, Hitler, Stalin, Chavez etc. If one amendment can be more important than others, I believe the first is the most sacred. Efforts to limit, as through the Fairness Doctrine and limits on speech are more dangerous than the events that the limitations seek to prevent. In the end Americans are, in total, a reasonable and tolerant people. I put my trust with the people and the wonderful founding documents that act as a protection of individual rights.

My school was on lock down yesterday for almost 3 hours because of a knife/gun scare. It is crazy to think what kids go through at this age. It is hard to watch my students to go through this system and not have the support to make the right change. It makes the Arizona shooting too close to home.

By the way, Jim and I agree to disagree with politics. What a surprise. I was a campaign political volunteer at the age of 18. I have always loved my political views. We have a very interesting household.

I appreciate all of your writings/blogs. Sorry I am a math teacher, not a language arts teacher so I am not expressive as I would like to be. If you or Robert are ever in the Denver I would love to buy you a drink.

I apologize to all. I read your post Michael first thing in the morning and saw Jim's outrageous, brazenly disrespectful comment and it enraged me. When I'm wrong, I admit it. When I'm an ass, which is more frequent than I'd care for it to be, I own up to it. While I perhaps should be more tactful, the fact is Jim's inability to acknowledge something that is so painfully, sadly clear - that there is a prevailing climate of hate and violence in our culture that without question contributed to the tragedy in Tuscon and all the uncountable tragedies - and for him to go even further and pompously discount what is so undeniable - this is grounds for my anger and I stand by what I said, unless and until an apology and unconditional acknowledgement is forthcoming. Since I don't believe it will be, I am taking leave of this blog for a while and focusing on work that needs to be done, including my health, supporting my family and nurturing hope in the world and opposed to wasting energy on futility. Adieu.

Robert,
I didn't mean my comment to come across as reprimanding you. I was going to delete Jim's and yours popped up before I could and I wanted to leave it for others to see. Please don't let Jim chase you from my venue anymore than I would let him chase me from yours (and he has ruined some of my friends blogs by doing similar things on theirs, so that they have decided to eliminate comments altogether—reason enough for me to ban him from this one permanently, but I think it's useful sometimes to see what that small segment of our population is parroting back and forth to each other from their rightwing media masters, as it were.)
You know I love you brother and appreciate your opinion however it's stated.

I understand why you need a break from Jlm, but I hope your leave isn't too long; I get a lot out of your posts here.

Thanks Loyeen, Michael and Miles. Nobody's gonna force me away - I just have a full plate these days and honestly don't have room or time to engage in Jim's provocations

Robert, I actually think the term "punk" for Jim is a compliment. That term is far too mild for someone as disturbed as he is.

I believe that deep down inside, Jim is actually a good man, just misguided and irresponsible in his utterances - therefore, sometimes dangerous.